The quest for perfection. Achieving the best aesthetic results

Achieving the best aesthetic restorations: are materials the answer?

The speaker described the five-step treatment workflow which they use for all cases (fig 1):

The position of the incisal edge is determined by aesthetics (Ramfjord et al., 1966; Mohl et al., 1988; McNeill et al., 1997). The amount of tooth that is visible depends on the patient’s preference. It is also influenced by phonetics, since the incisal edge position affects the pronunciation of ‘S’ and ‘F-V’ sounds. Regarding function, this will be decided by the anterior limit of protrusive trajectory.

This position is determined with the ‘digital smile design’ app (DSD/APP). It is a useful tool to plan the rehabilitation, and to communicate with the patient about aesthetics through the use of pictures and dynamic recordings. To accurately judge the incisal edge position for each patient, it is vital to observe them smiling and talking in a video.

The 2D design has to be transformed into a 3D mock-up (whether from an analogical wax-up or a direct digital wax-up). The wax-up is used to fabricate the provisional, which can be printed or milled in the digital workflow. Once the provisional is approved, the definitive restoration can be made in any material – it is not the material that is the key to success, but the proper workflow.

Next, a functional diagnosis is needed to see if patient’s occlusion should be changed. When the patient has a good balance between functional demands and their capacity to adapt (no complaints, no symptoms, and no signs of pathology or dysfunction), the occlusal scheme does not need to be changed. However, when the patient presents with temporomandibular joint (TMJ) or muscle pain, dysfunction, an uncomfortable bite, hypersensitive or worn teeth, broken restorations, abnormal tooth mobility, tooth migration, etc., we are likely facing pathologic occlusion. This occlusion must be re-organised in order to achieve the ideal model of therapeutic occlusion.

To re-organise occlusion, the start point should always be the centric relation, because it is a reproducible position (Keshvad & Winstanley, 2000-2001; Rinchuse & Kandasamy, 2006). There are numerous methods for achieving this, but the speaker highlighted Lucia’s jig (Lucia, 1964) and Kois’ de-programmer (Kois, 2002) methods as the two which are most convenient (in his experience) (fig 2–3). Both methods provide a stable first contact point position which can be scanned to prepare a highly accurate bite registration. A digital workflow allows us to avoid the errors which can arise in every step of analogue workflows.

There is a great deal of misinformation about this topic. This is because, traditionally, it was recommended that OVD not be changed. However, in the majority of cases, OVD should be changed, as it provides several advantages (Calamita et al., 2019):

Augmenting the OVD has been shown to be safe when it is made between the limits of the functional adaptation (McNeill et al., 1997; Abduo et al., 2012; Moreno-Hay & Okeson, 2015). When opening the bite, however, it should be noted that the occlusion has to be rebuilt in the three dimensions of the space (not just vertically). This has implications involving teeth, TMJs, muscles and phonetics. Therefore, to proceed, we must first work with provisionals. Provisionals at the same time act as a clinical test and as a guide for the definitive prosthesis.

How much OVD can be augmented? Posselt’s diagram shows that when the mandible opens, it also moves down and back (Posselt 1952). The ‘1-2-3 rule’ is a useful way to calculate this movement: for every additional 1mm in posterior teeth, the height in incisors increases by 2mm, the overjet by 1.3mm overjet and the incisal pin of the articulator by 3mm (Rebibo 2009) (fig 4).

The angle classification determines how much the bite opening should be increased. Class I bites can be opened easily. With class II, the lingual contact is lost when the bite is opened and the occlusion destabilises. In cases involving class III angles, the lingual position of the upper incisor can be compensated (if necessary) according to the treatment plan.

The literature tends to guide us towards opening the bite. Numerous methods have been described, like facial proportions, free-way space, deglutition, phonetics, cephalometric, cemento-enamel junction, occlusal splint or TENS.

The facial aesthetic harmony is not relevant in this process, since attempts to alter the height of the face by changing OVD by 2–6mm are not generally visible (Gross et al., 2002). However, it is sometimes the case that the facial height needs to be changed by at least 8mm, and with so large opening, the lingual face of the restorations will be too thick. This altered lingual incisor anatomy may cause phonetic alterations when pronouncing ‘S’ sounds.

When lengthening the upper incisors, the anterior functional guidance should be considered to avoid hampering the mandibular displacement and overloading the restorations, which could lead to failure. The clinical relevance of this was proved in a study showing that the risk of veneer fracture is 2.3 times higher after incisal lengthening (Gurel et al., 2013). The flatter the disclusion angle, the less stress on the restorations (fig 5–6).

Digital tools which can register reference planes and scan dental arches may be used as an alternative to conventional articulators. Taking this even further, the speaker described some software that can scan the face and merge the CBCT records, to give us the so-called ‘digital patient’.[1]

Now, provisionals can be fabricated using several procedures. The speaker said they prefer the indirect bonded approach with polymethyl-methacrylate (PMMA), which can be either printed or milled, due to its strength and precise finish.

The sequence of the treatment move in the opposite direction to diagnosis (fig 7). After periodontal treatment, the old restorations are replaced with composite and the required endodontics are performed. Then, the single-unit PMMA additive provisionals are placed for aesthetic and functional test (fig 8). Next, the definitive restoration should start by placing using the lower anterior ceramic veneers, then lower posterior conservative crowns and onlays, and the upper anterior and posterior final restorations.

Provisionals are used as a guide for preparing the abutments for the final prosthesis. The speaker stated that they use leucite reinforced glass ceramic (Empress CAD®) in normal cases, as it offers the best combination of aesthetics and strength; in the case of bruxers, they use lithium disilicate (Magne & Belser, 2004; Gurel et al., 2005). Once all definitive restorations are cemented, it is time for occlusal equilibration and force control. To this end, different articulating papers are used, especially those with a thickness of 100, 21 and 8µ. Finally, a milled splint is placed and adjusted.

The speaker concluded by stating that perfection doesn’t exist. However, we can certainly get close to it with proper treatment planning and workflows, meticulous execution and a force control by occlusal equilibration.

[1]   The speaker showed the Modjaw® software as an example. 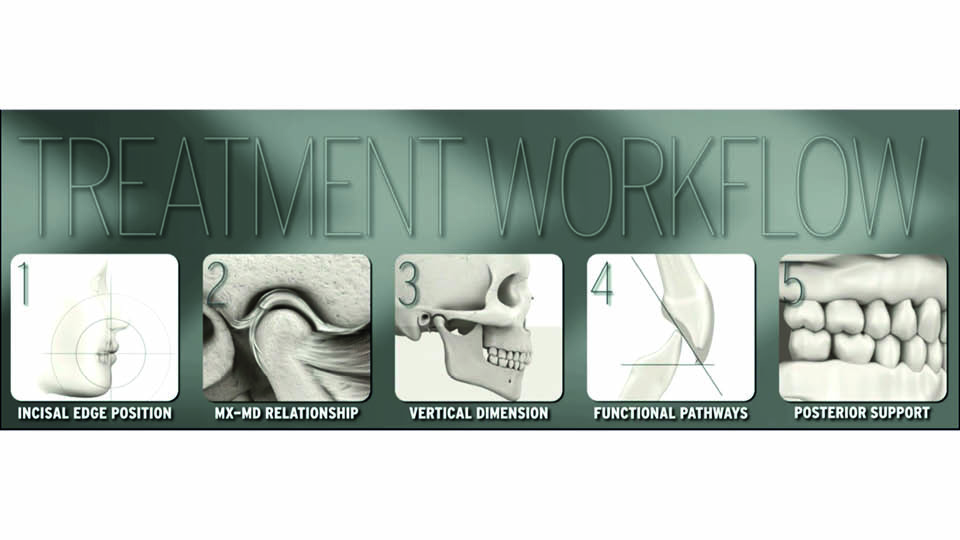 Fig 1: The five steps of treatment 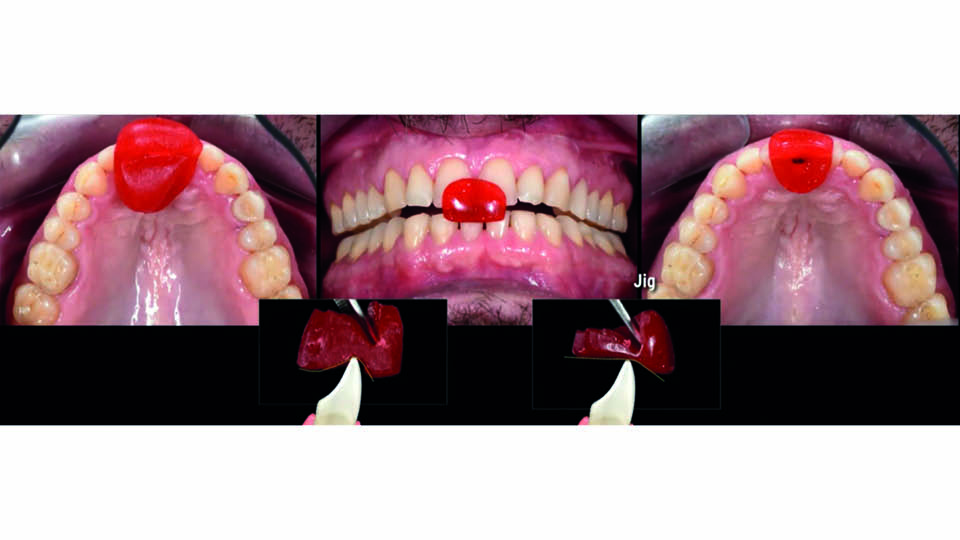 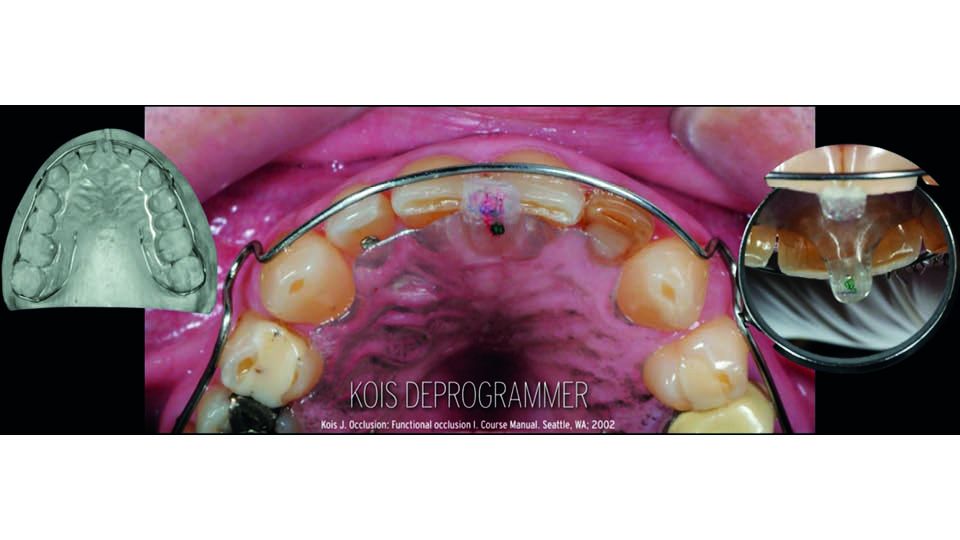 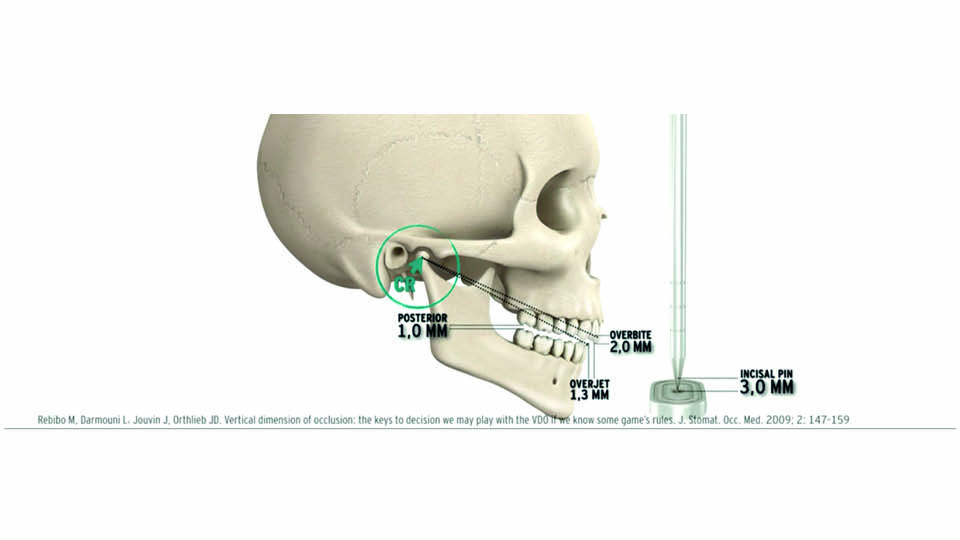 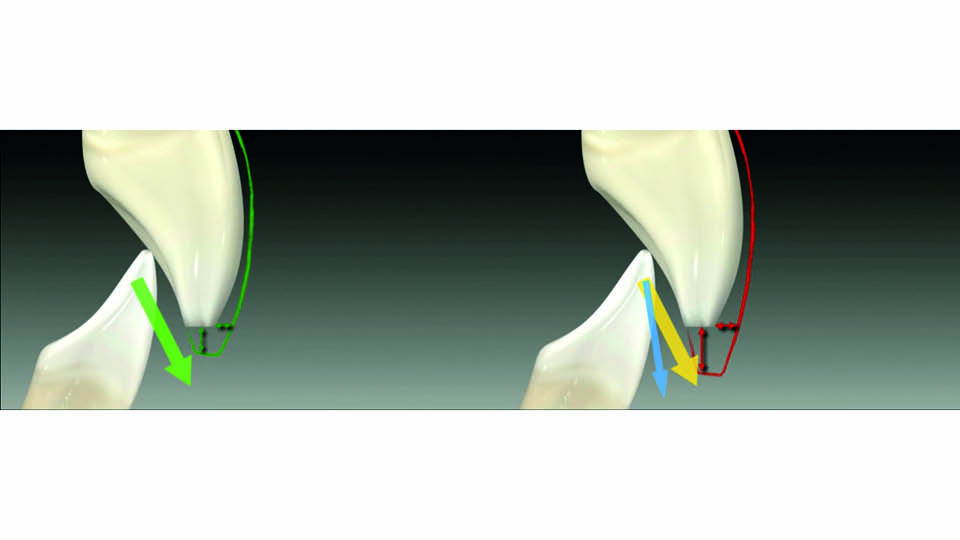 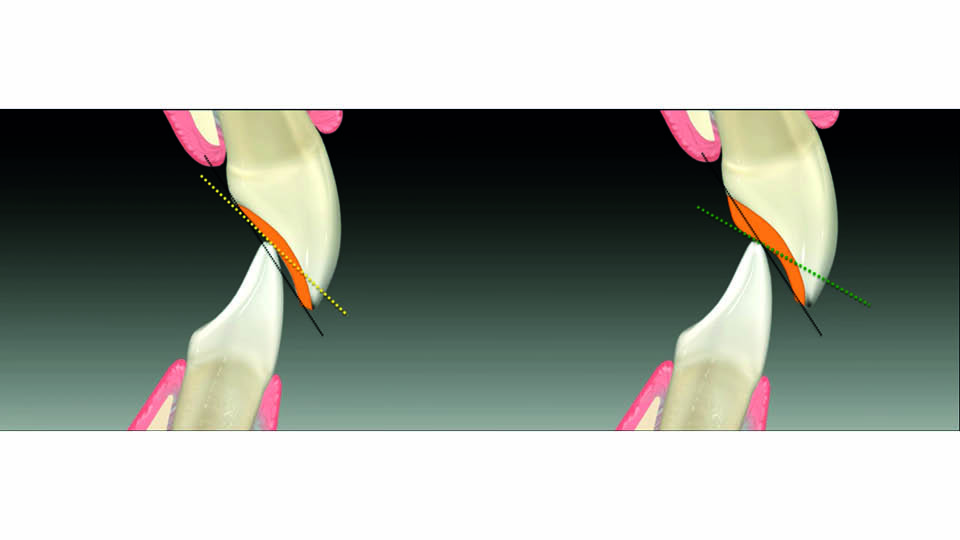 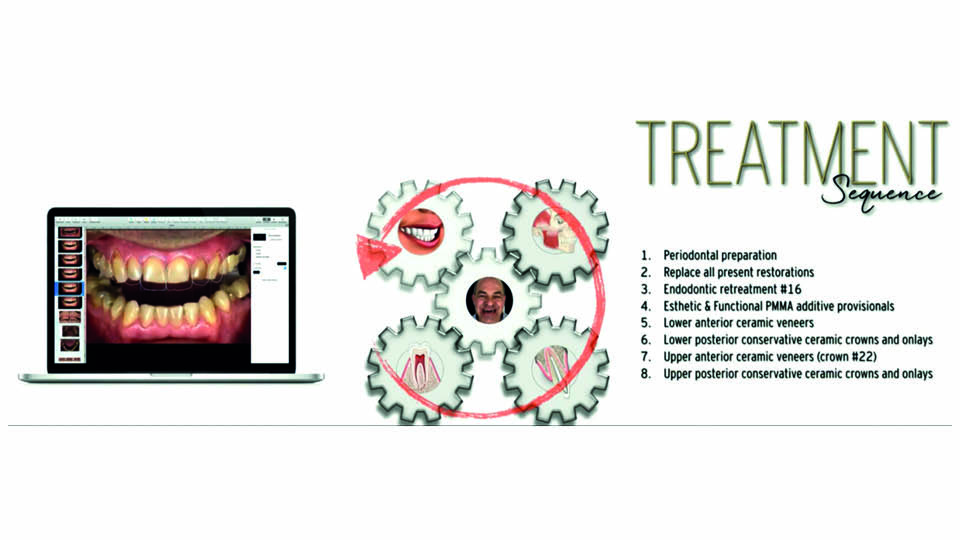 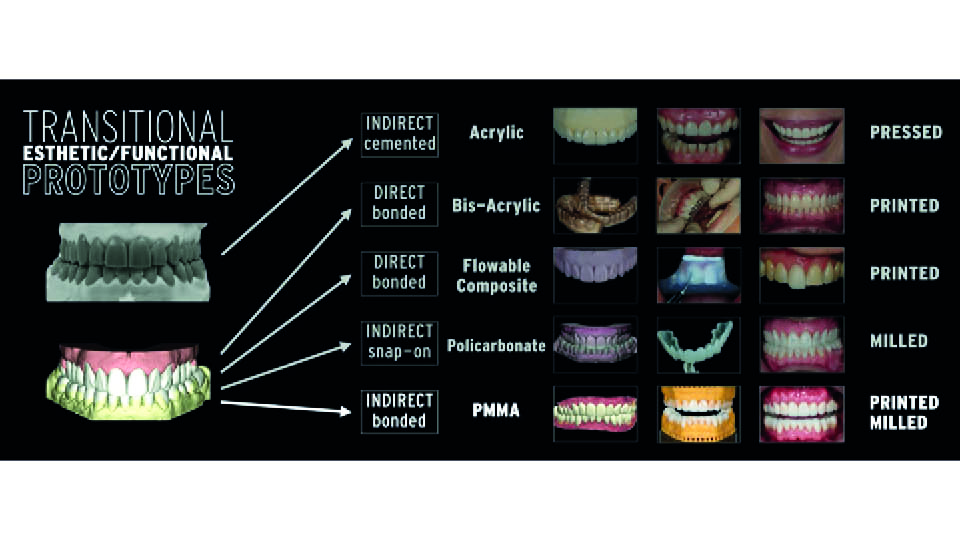 Posselt U. Studies in the mobility of the human mandible. Acta Odonto Scand 1952

Rebibo M, Darmouni L, Jouvin J, Othlieb JD. Vertical dimension of occlusion: The keys to decision we may play with the VDO if we know some game’s rules. J Stomat Occ Med 2009;2:147-59.

Prosthetic considerations when rehabilitating implants in the aesthetic zone

In the aesthetic area, four considerations are essential: form, colour, biocompatibility and mechanical performance. When considering aesthetics, perception is key. The patient’s perception is their subjective interpretation, and it should be carefully explored. An efficient and effective line of communication between the patient, dentist and technician is a prerequisite for good results. With this in mind, we must know which cases can compromise aesthetics over function, or function over aesthetics. The speaker presented three cases to illustrate these concepts (fig 9).

The first step is to prepare a wax-up and a mock-up to plan the aesthetic appearance and to guide implant surgery (fig 10). Provisional restorations guide the soft tissue by the critical and subcritical contours (Su et al., 2010) and the shape of the papilla by the position of contact points (Wittneben et al., 2013). The soft tissue profile is also influenced by times the number of times the abutment has been re-connected: the more disconnections, the more tissue is lost.

Then, the supra- and infra-gingival shapes should be communicated to the lab and the material must be selected. Zirconia abutments can provide good aesthetic results (Brodbeck et al., 2003), but they are vulnerable to fatigue. Intraoral forces can break the abutments (Stimmelmayr et al, 2012, Klotz et al., 2011) or the implant platform may be damaged by the zirconia abutment (Kim 2013).

The alternative is to use zirconia-titanium in the abutment and a titanium-titanium connection between the abutment and implant platform (Guilherme et al., 2016). Although this option maintains the integrity of the implant platform, complications may still occur. Debonding of the titanium base or fracture (either of the titanium base or of the zirconia part) must be addressed by re-cementing the abutment base or replacing the whole abutment (Putra et al., 2019). Other biological complications may arise directly from veneered zirconia reconstructions cemented extraorally on non-original titanium bases. The significant increase in PD and BoP values observed in these cases may be due to the wide diameter and reduced height of the non-original bases (Asgeirsson et al., 2019).

Alternatively, whole titanium abutments can be chosen. These can also be gold coloured. It has been shown that patients do not perceive these abutments as unaesthetic (Bidra & Rungruanganunt, 2013). In this patient’s case, customised gold-coloured titanium abutments were used to prevent potential mechanical problems in the narrow spaces, and zirconia copings with ceramic crowns were cemented over them (fig 11–12).

To prevent the cement from flowing into the sulcus when the crown is inserted, a smaller copy of the abutment should be used (Wadhwani & Piñeyro, 2009).

In this case, the fracture was in the crest level. Although controversial, the patient decided to extract the tooth and replace it with an implant. The coronal fragment of the tooth was attached with composite to a titanium cylinder and used as an immediate provisional (fig 13). To prepare the new provisional from the lab, a customised transfer was used to transmit the subgingival contour to the technician (fig 14). Additionally, pictures – normal and polarized – and videos of the patient smiling and talking were sent by email, and a telephone conversation was held to help explain the details. To perform the few changes required in the shape, a second provisional was made as an exact replica of the first one that was sent to the lab. The patient was travelling from Switzerland to Portugal and so there was limited clinical time with her available. By giving her a second provisional while maintaining the first one made out of the tooth fragment, the shade matching ability was improved. Cross-polarized pictures were also used, which can be very helpful for carrying out a virtual try-in of the final restoration. For this reason one single central incisor restoration was delivered in only one take. A virtual try-in was made before the definitive prosthesis was fabricated. The whole process demonstrates how difficult it is, and the effort required to achieve comprehensive communication with the technician in the quest for perfection.

The third case involved a young patient who wanted a pretty smile. They presented with missing soft tissues in 21–22 caused by periodontitis and a high smile line. Overcorrection by orthodontic extrusion was performed, and the surgical guide was then made to extract 21–22 and place two implants (fig 16–17). The early provisionals guided the cicatrisation; they looked good, but the patient didn’t like them because the teeth weren’t white enough and looked too wide. This feedback was communicated to the lab, and the veneers were cemented and new impressions of the two implants were sent with customised transfers. The final result was successfully accepted by the patient. 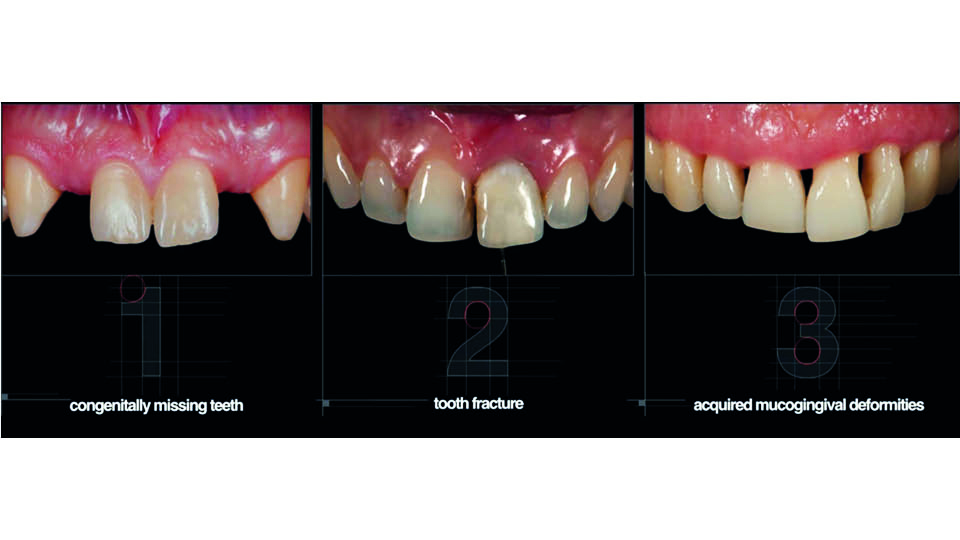 Fig 9: The three cases presented by the speaker 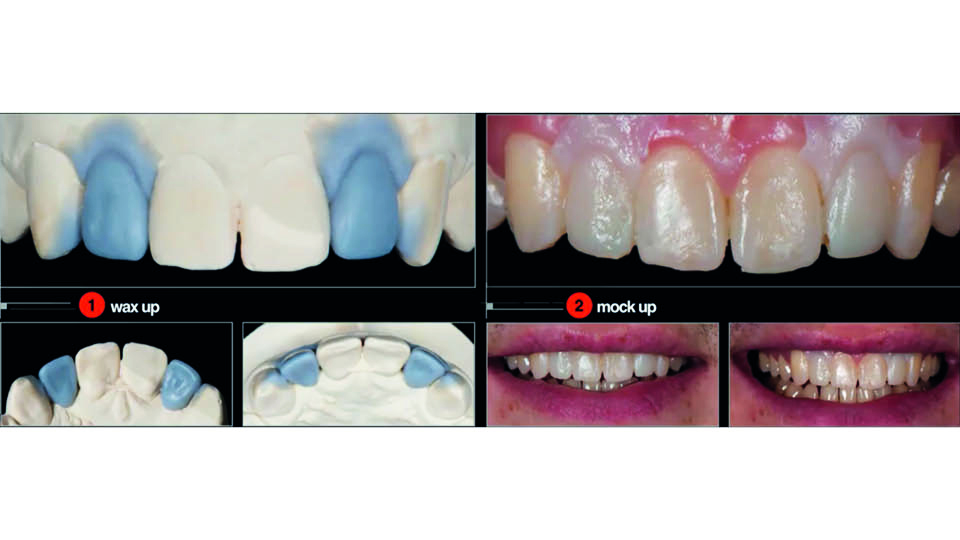 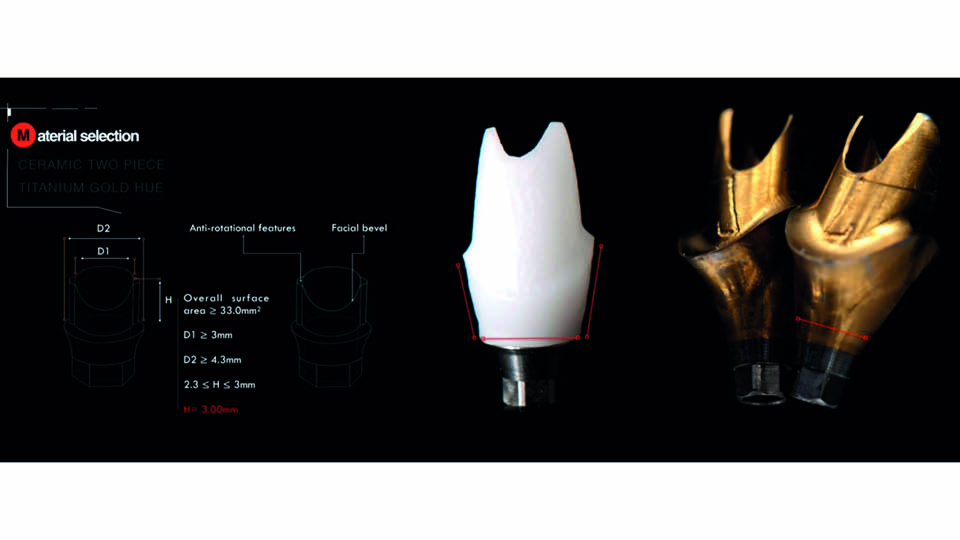 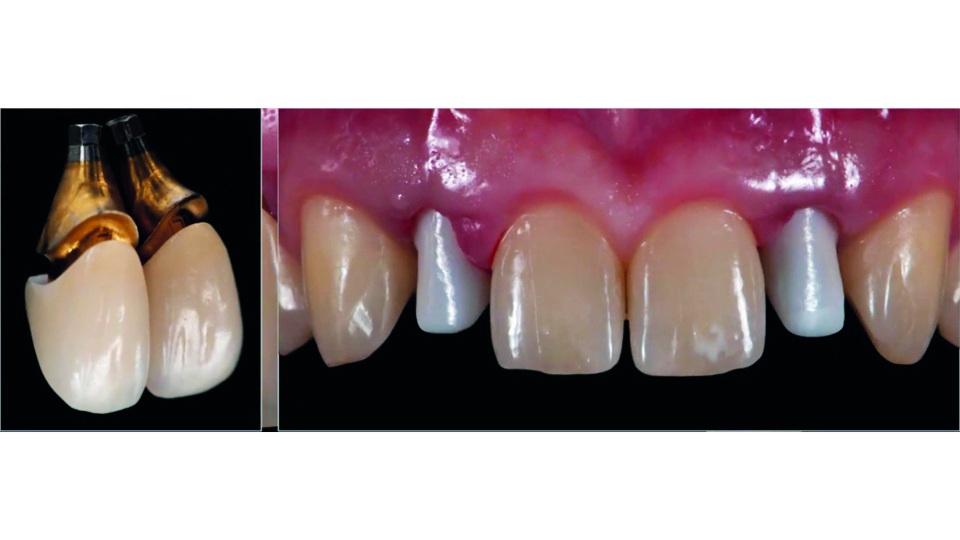 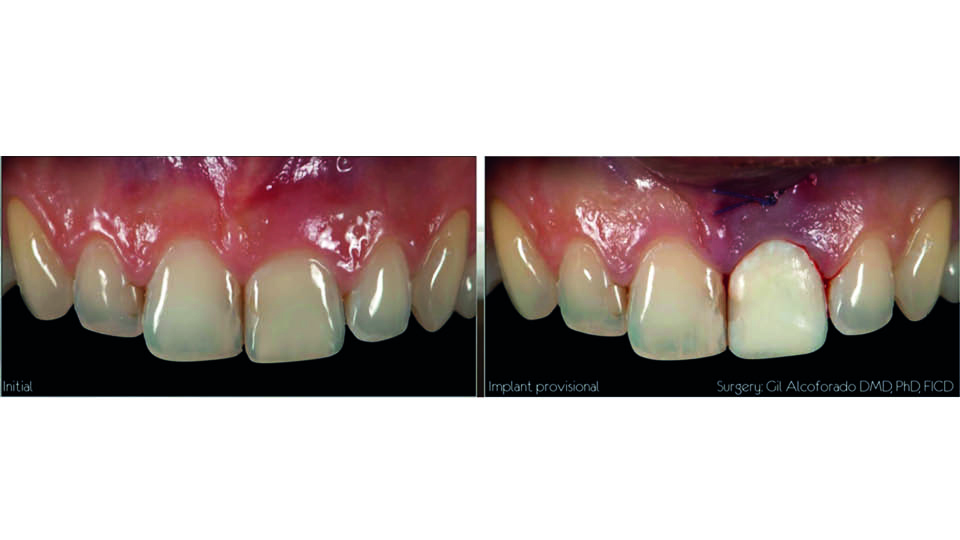 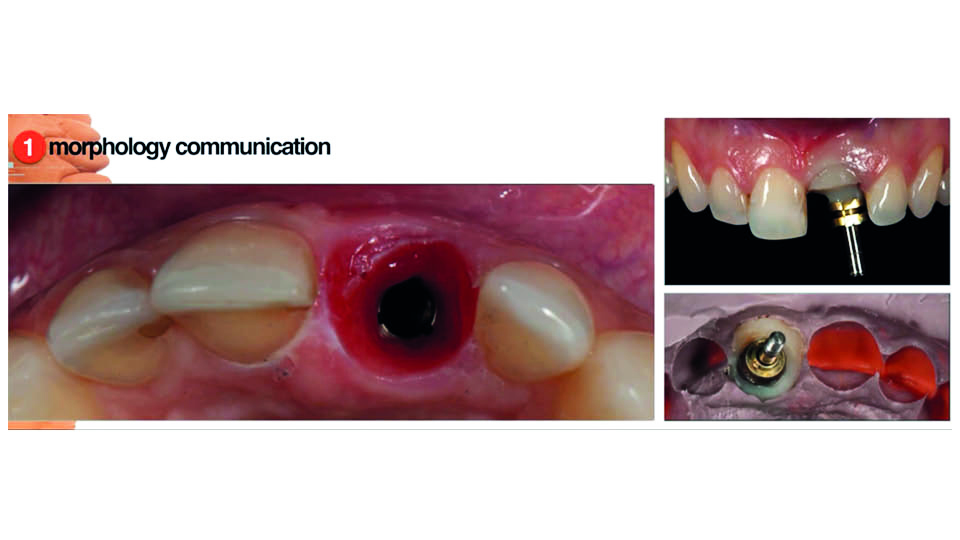 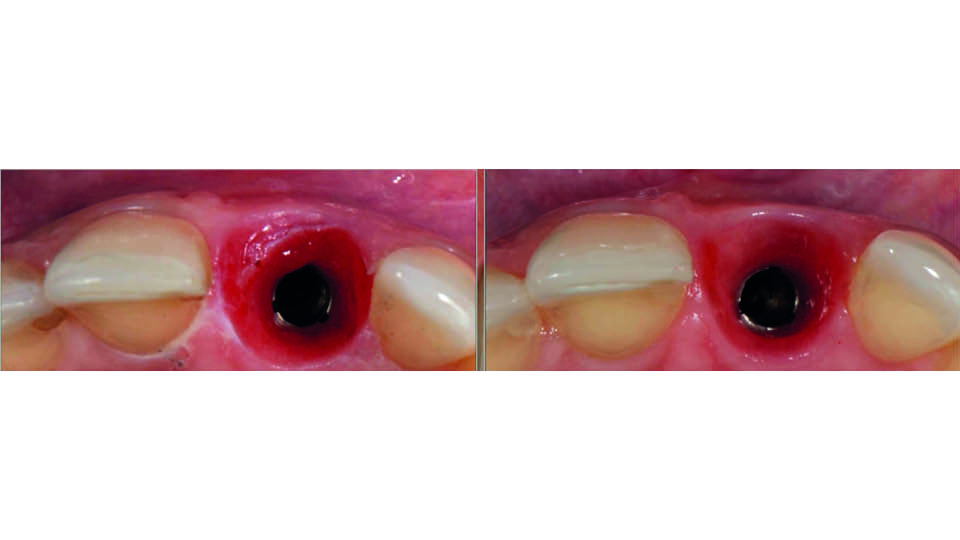 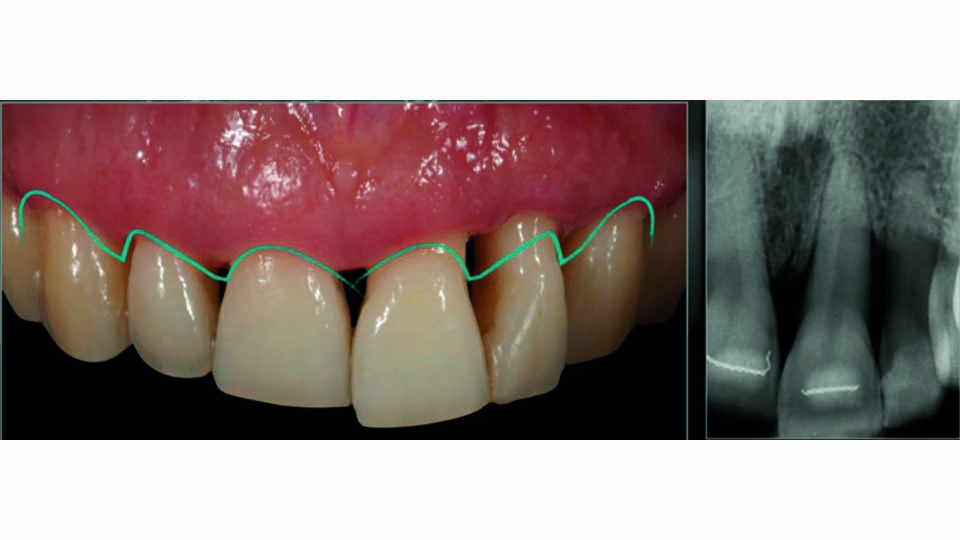 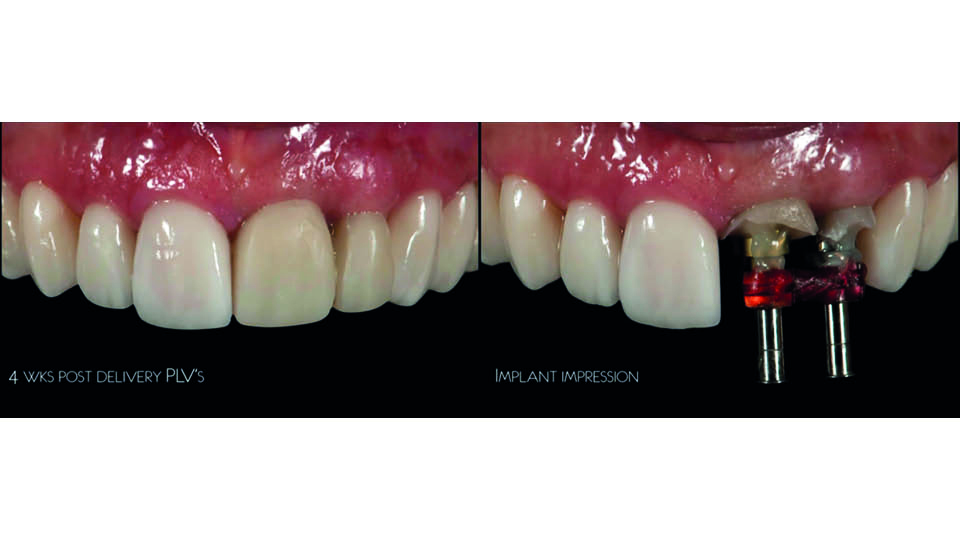 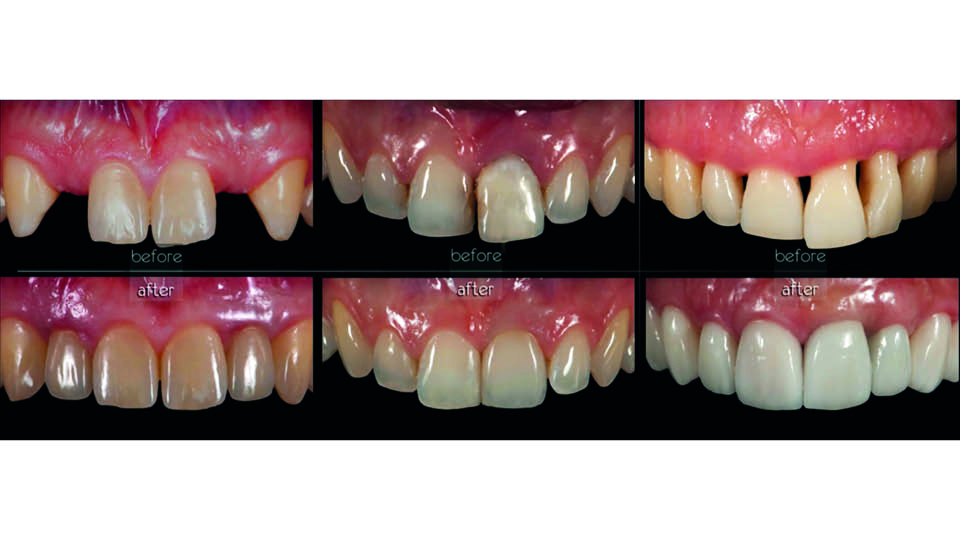 Fig 18: Pre- and post-op pictures of the three cases presented 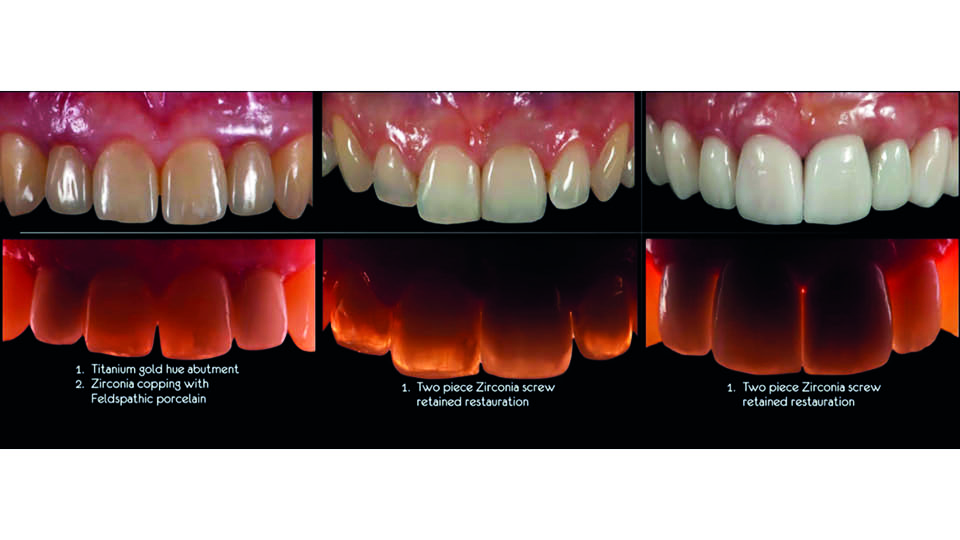 fig 19: Translucency of the final prostheses

Degidi M, Nardi D, Piatelli A. One abutment at one time: non-removal of an immediate abutment and its effect on bone healing around subcrestal tapered implants. Clin Oral Implants Res 2011;22(11):1303-7.