Case 1: Large perforation of the sinus membrane during sinus augmentation

It has been reported that membrane perforations are the most frequently encountered surgical complication when performing sinus augmentation procedures. Small perforations can usually be successfully managed using resorbable membranes (fig 1). However, large perforations are difficult to treat (fig 2). According to the literature, when perforations are larger than 10mm, implant survival rate drops significantly, from 97 to 74% (Hernández-Alfaro et al., 2008).

The speaker described the sinus augmentation procedure, during which they encountered a large perforation (20x20mm) when lifting the membrane. It appears that membrane elevation is the most critical step of these procedures (Stacchi et al., 2015). The speaker reflected that an inadequate osteotomy design made the surgical access more challenging, and this may be what ultimately lead to the tear in the delicate Schneiderian membrane.

Conventional treatment guidelines dictate that we suture the membrane. However, this is a difficult procedure and in fact often results in the tearing of the membrane and new perforations. However, the speaker described the technique of making a hole in the lateral bony wall near the surgical window. The hole is used as a window through which to pull the membrane with a suture thread, and thus reduce the size needing to be covered with a collagen membrane. With this technique, there is no need to suture the perforation completely, thereby avoiding inadvertently causing additional damage to the Schneider membrane. Compared with the conventional procedure (suturing the two sides of the membrane), the bony hole reduces the tension and facilitates suturing (fig 3–4). 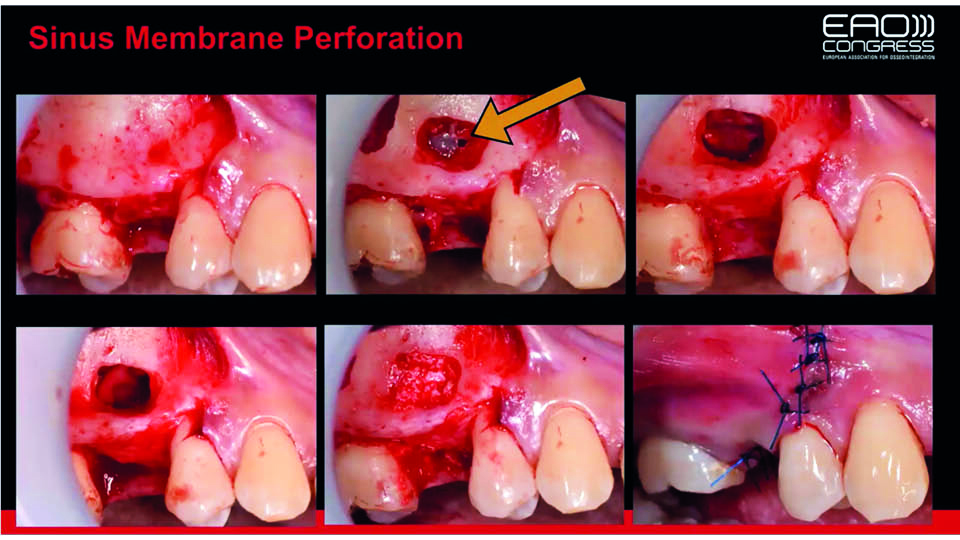 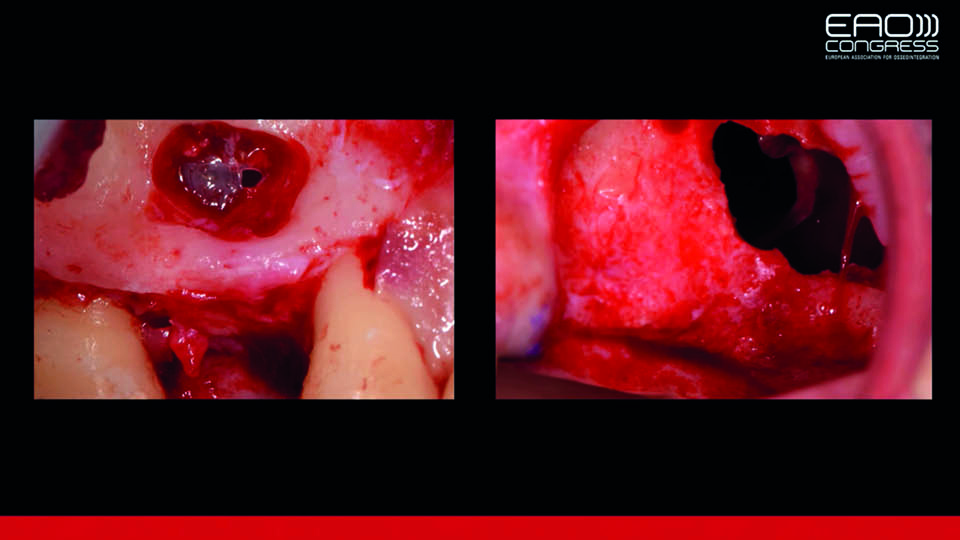 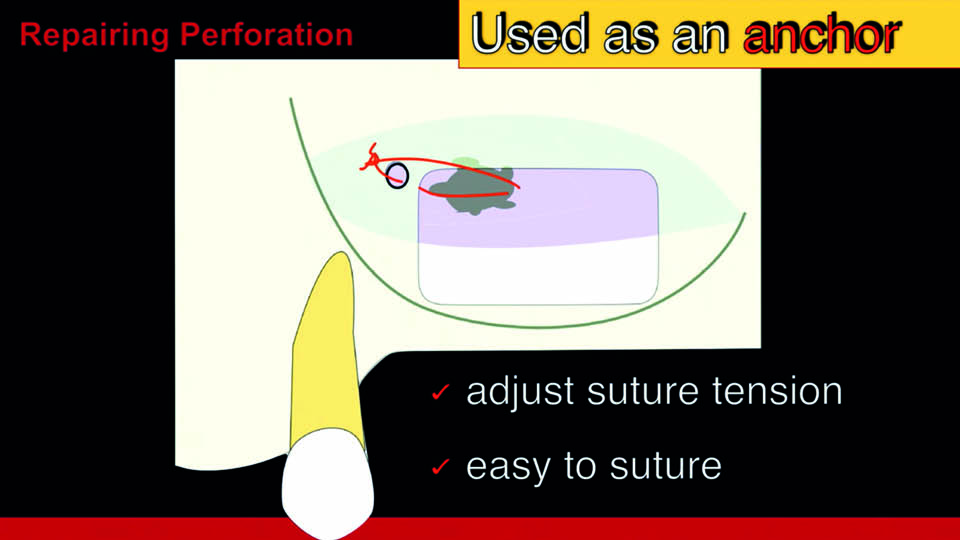 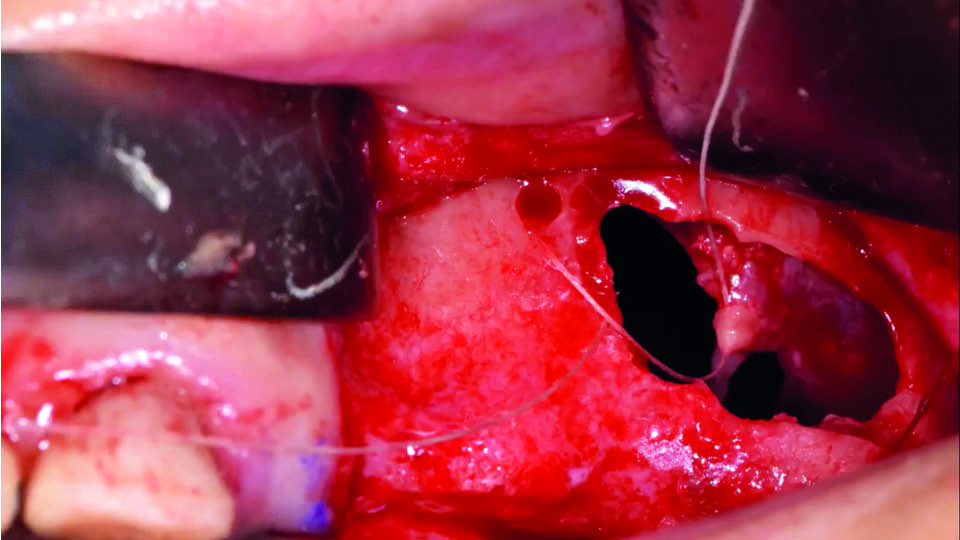 The second speaker described a patient, who had presented with pain, fever and sinus suppuration along with oroantral communication and a 6mm vestibular bony dehiscence in a nearby implant (fig 5). Examination found multiple issues: possible bacterial contamination of the previous sinus graft, poor endodontic treatment and poor prosthetic treatment planning, all leading to biological failure (peri-implant bone loss and peri-implantitis) (fig 6).

It has been reported that sinus graft infection occurs in around 2.3% of all sinus grafting patients (Urban et al., 2012). The fist treatment objective was infection control. The failing implant at 16 was removed and pus was drained from the site. Simultaneously, the tooth at 15 was extracted and the peri-apical cyst was removed. The implant at 14 was kept (for the moment) to support a fixed temporary bridge along with a distal implant at the site of tooth 17. The root of 15 was then removed and granulation tissue was removed with thorough debridement. Six months later, re-entry was performed to place three more implants at 16, 15 and 14 with minor intra-alveolar sinus elevation. The implant showing buccal exposed threads was removed, and simultaneously a new implant was inserted. Guided Bone Regeneration with resorbable collagen membrane and a mixture of autologous bone and demineralized bovine bone was executed on the implant at 14. Simultaneous GBR was performed in 15, and all implants were immediately loaded with a new fixed provisional (fig 7–8). No connective tissue graft was required and prosthodontic treatment continued uneventfully. The speaker shared their four-year follow-up (fig 9–10). 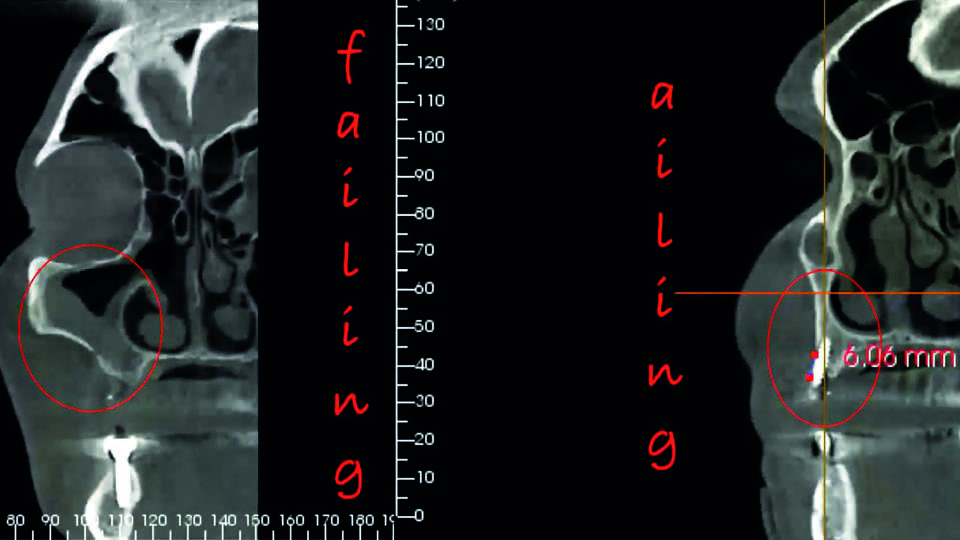 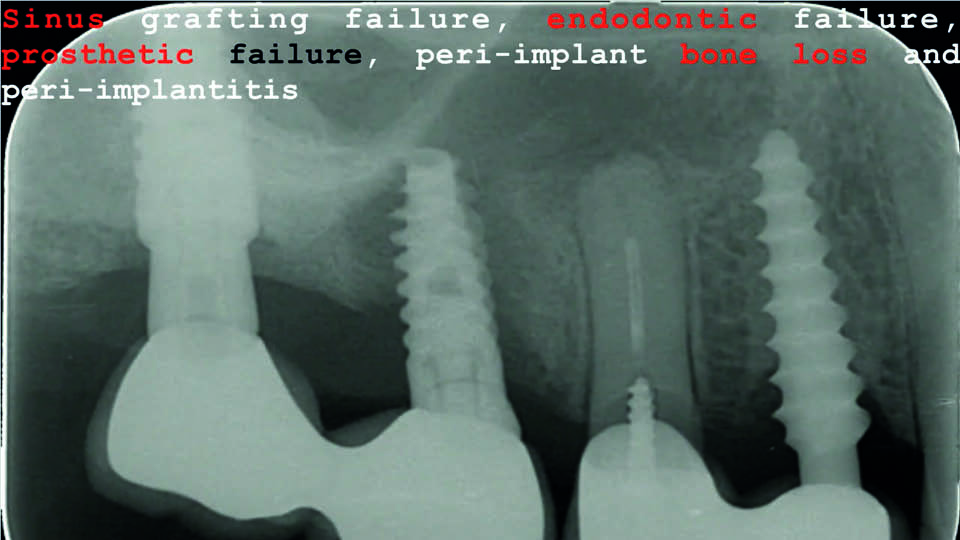 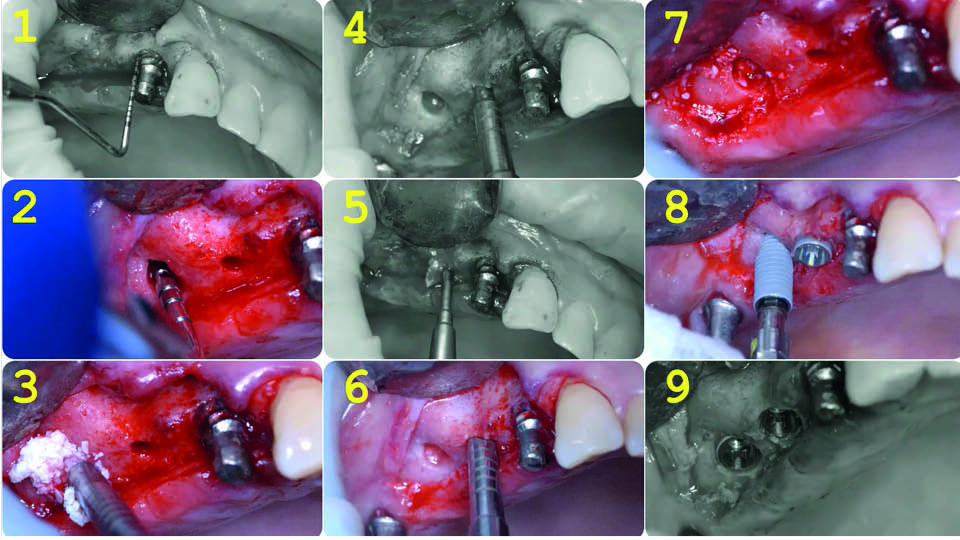 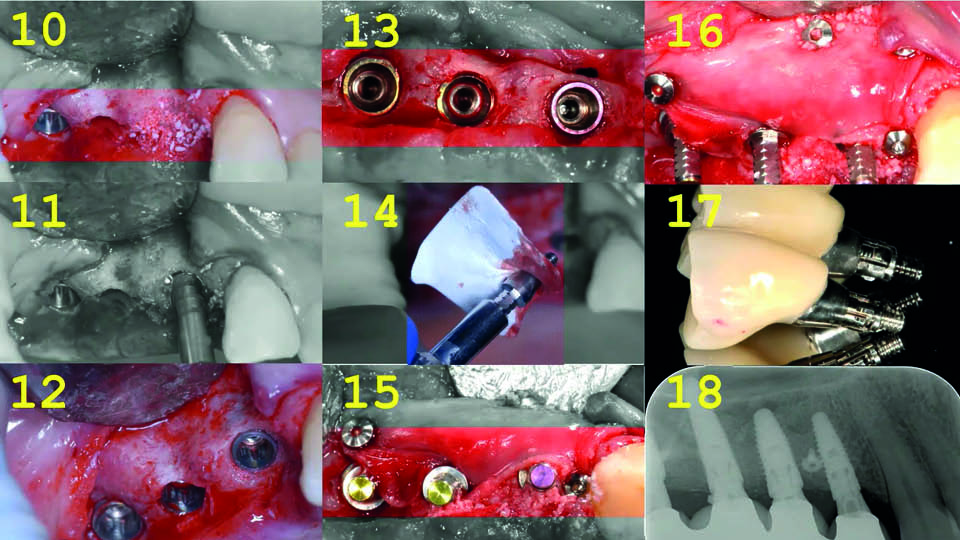 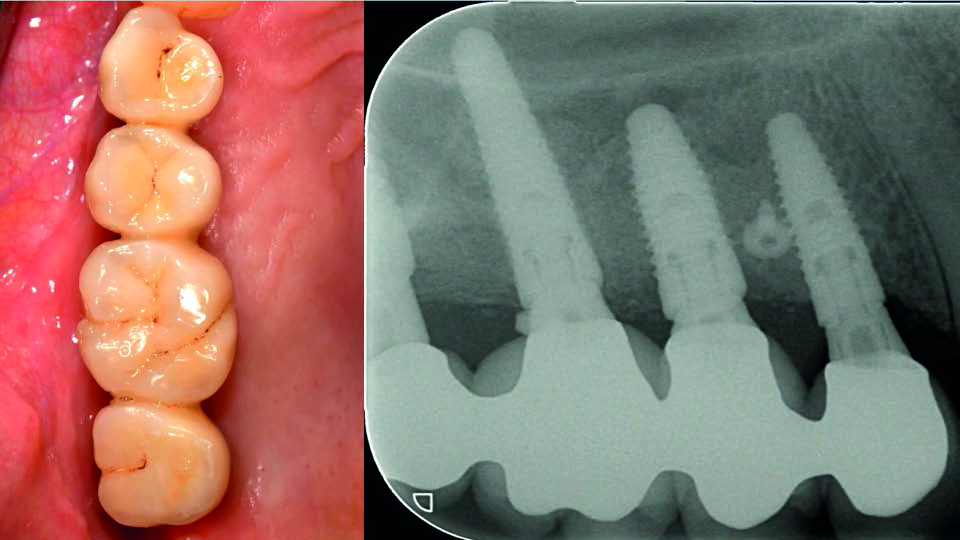 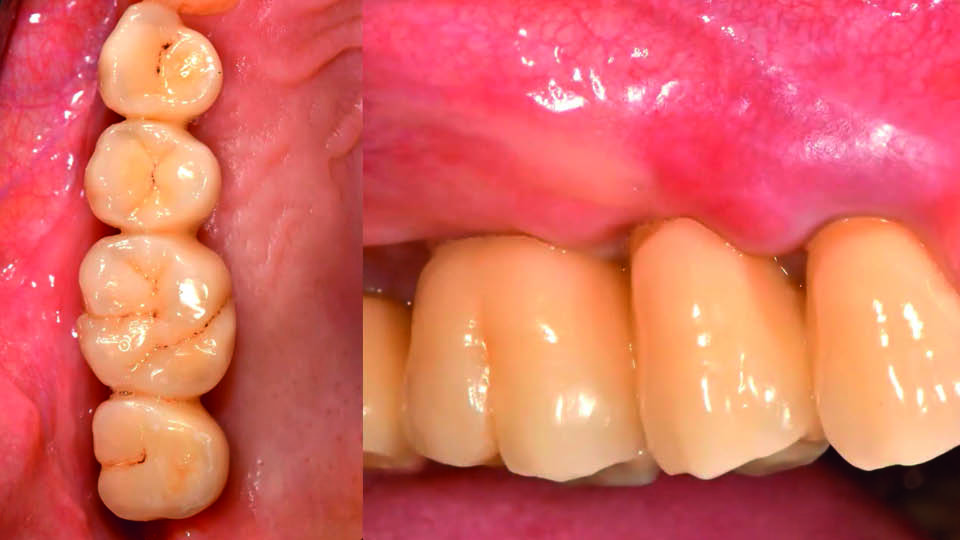 The next case involved a twenty-year-old patient with missing anterior teeth due to a car accident. The patient had hard and soft tissue deficiencies in the upper anterior region.

The operation was performed according to current treatment guidelines, and each step is outlined in figures 11–14.

Healing was uneventful, although a lack of attached gingiva and a decrease in vestibular depth were observed in the area (as would be expected). The six-month post-op CBCT showed a gap between the bony bed and the block graft. When reopening, most of the bone block had become granulated tissue and no ossification was present.

Reflecting on this outcome, the speaker stated that the following factors may have been reasons for failure:

A vestibuloplasty using Mucograft® was then performed (fig 15–16). An autogenous bone block is planned, after which the original prosthetic treatment plan will be carried out. 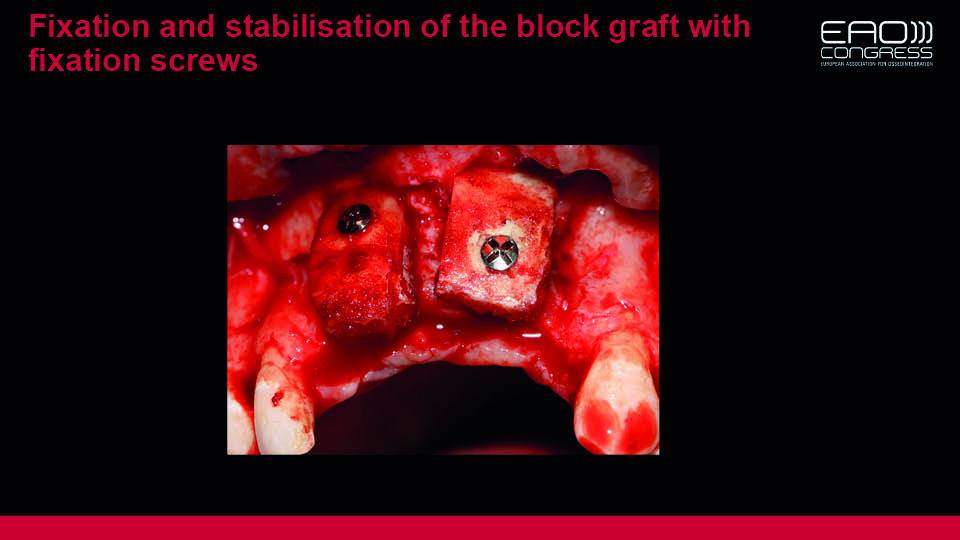 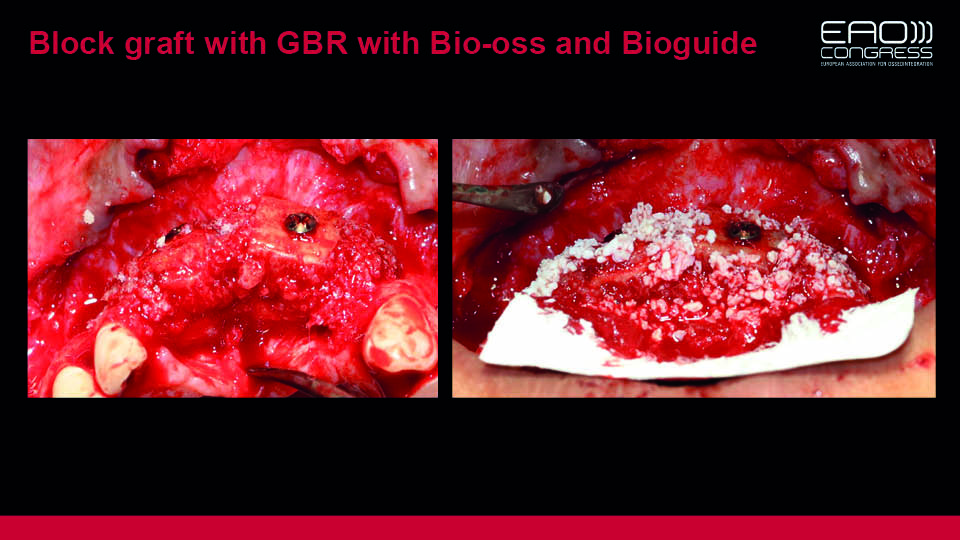 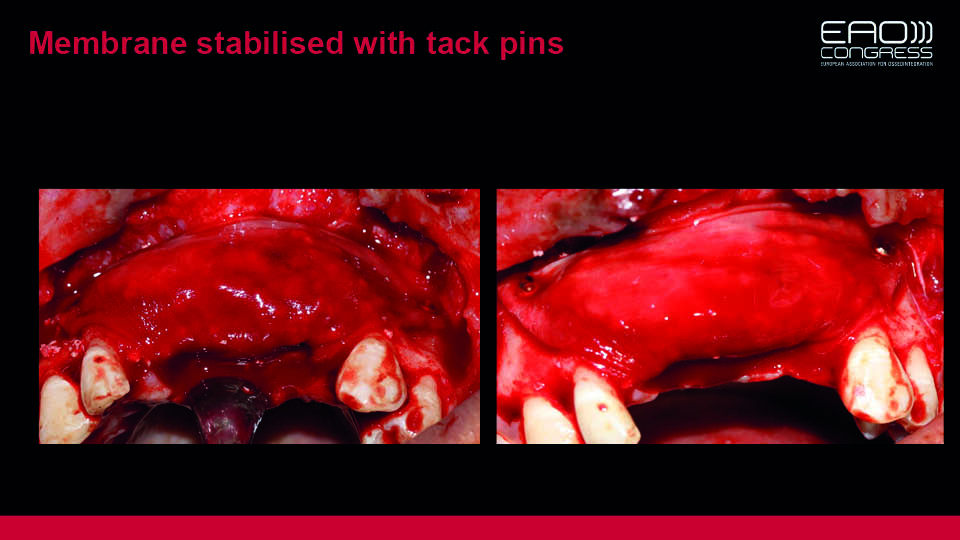 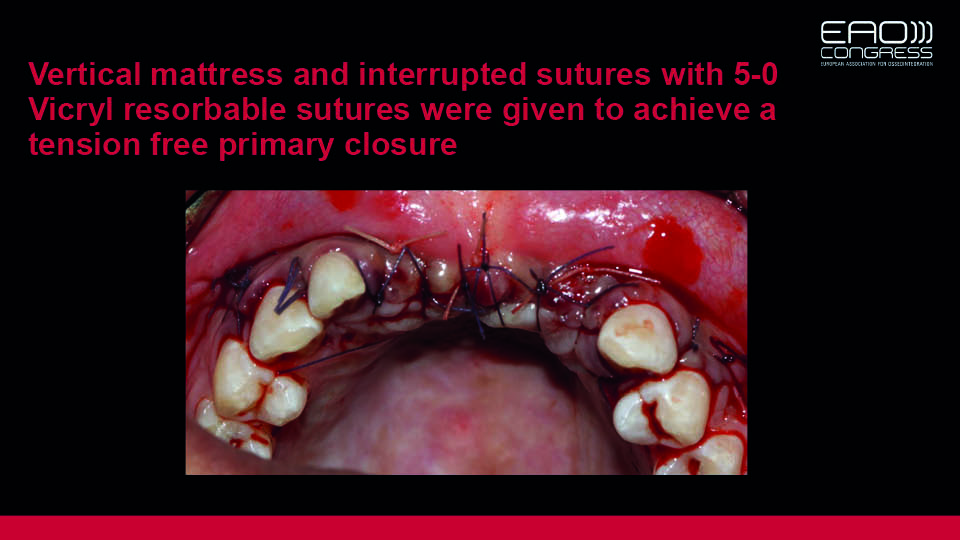 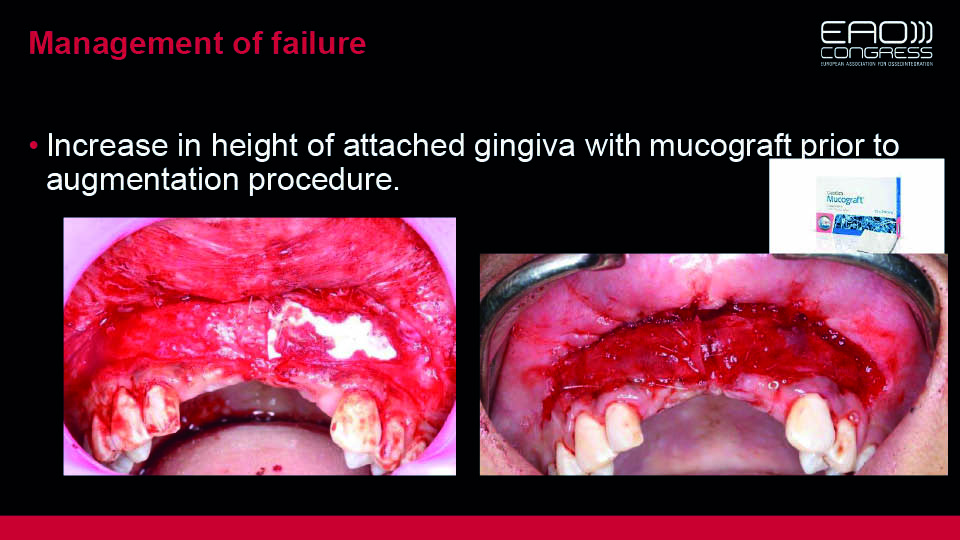 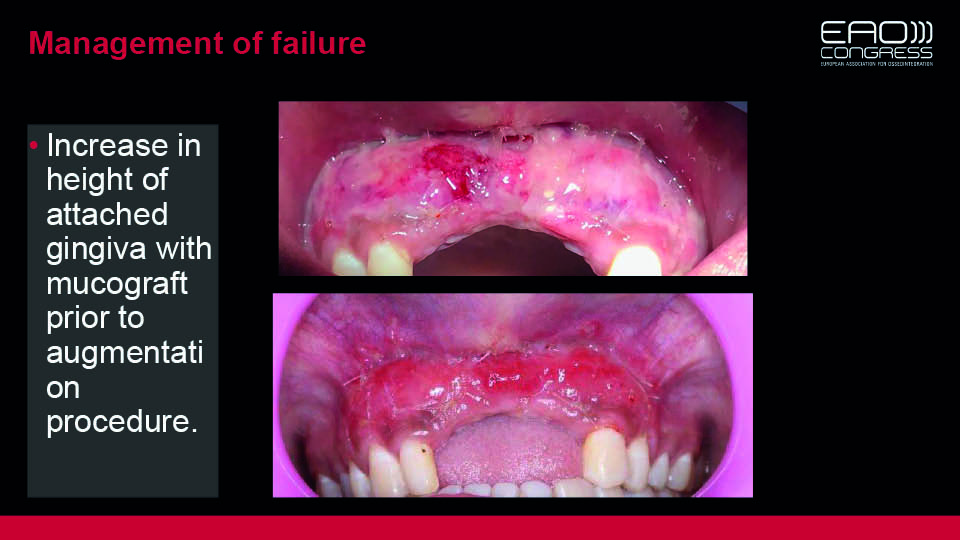 The speaker presented the case of a 55-year-old patient, complaining of pain and swelling at tooth 12 (which had previously received root canal treatment and apiceptomy in 1998). Then, in 2007, an implant had been placed at tooth 11. Now, percussion testing on tooth 12 was positive and a probing depth of 9mm was measured between teeth 12 and 11. Imaging confirmed both peri-implant infection and apical pathology of tooth 12. A surgical approach was undertaken in an attempt to debride the peri-implant defect and to revise the previous apicectomy – this revealed a communication between the apical area of the tooth and the distal and apical defect of the implant.

According to the recommended decision-making flowchart devised by Chan et al. (2011) (fig 17), surgical intervention was planned in order to:

However, the surgical sites failed to heal and the patient continued to complain of local inflammation and pain. The decision was then made to remove the implant and the tooth. A free gingival graft was placed on the socket and a fixed bridge was planned to replace the missing teeth. The speaker stated that to avoid these types of complications when placing implants, the presence of neighbouring periapical lesions should be taken into account as sources of bacterial contamination. The extraction socket should be thoroughly curetted in order to eliminate granulation tissue, and longer healing periods should be observed following endodontic treatments.

The speaker stated that to prevent this complication when placing implants, the presence of neighbouring periapical lesions should be taken into account as sources of bacterial contamination. The extraction socket should be thoroughly curetted in order to eliminate granulated tissue, and a longer healing period should be observed after endodontic treatments. Maintenance is key to control this kind of problem from the beginning. 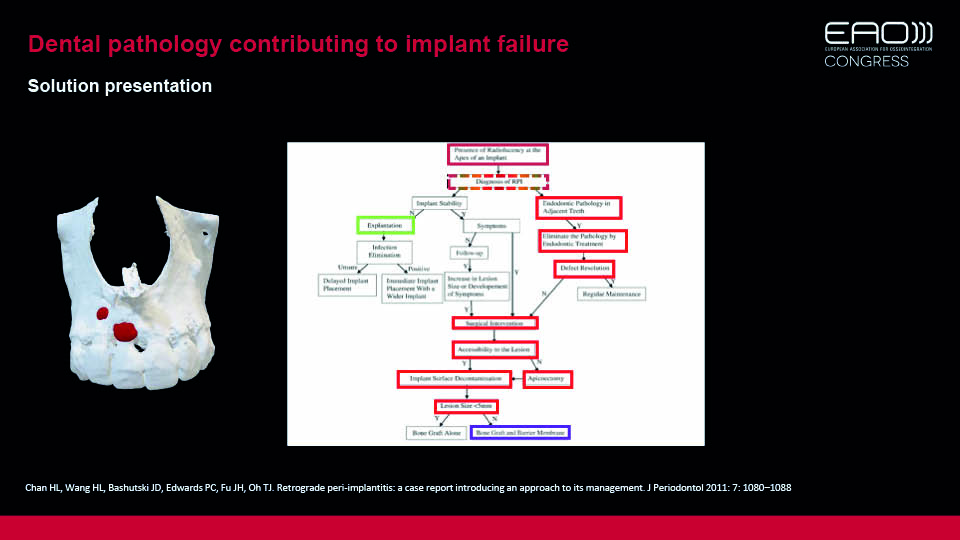 Case 5. Complications and management of All-on-4 treatment – a case report

The next speaker presented their case report involving a 55-year-old male patient who had a terminal dentition, with multiple teeth lost due to periodontitis. The patient was a heavy smoker, and wanted a fixed reconstruction. To this end, four implants in the maxilla and six in the mandible were planned. Surgical guides were prepared and implants were placed as part of a flapless approach. Next, impressions were taken and a provisional prosthesis was installed in 24 hours.

Eight months later, biomechanical complications began to appear in the maxillary all-on-4 reconstruction. The distal implant’s osseointegration had been lost; the abutment of the implant in the right central incisor had fractured; the prosthesis had broken in the right premolar area and the corresponding implant showed signs of bone resorption (fig 18–19). Since these complications were all signs of overloading, the option of re-placing the lost implant to restore the all-on-4 reconstruction was rejected. Instead, the decision was made to increase the number of implants in the maxilla. Approximately one year later, the final restoration was placed (fig 20–21).

The speaker concluded by analysing the potential reasons for these complications. They were classified as: 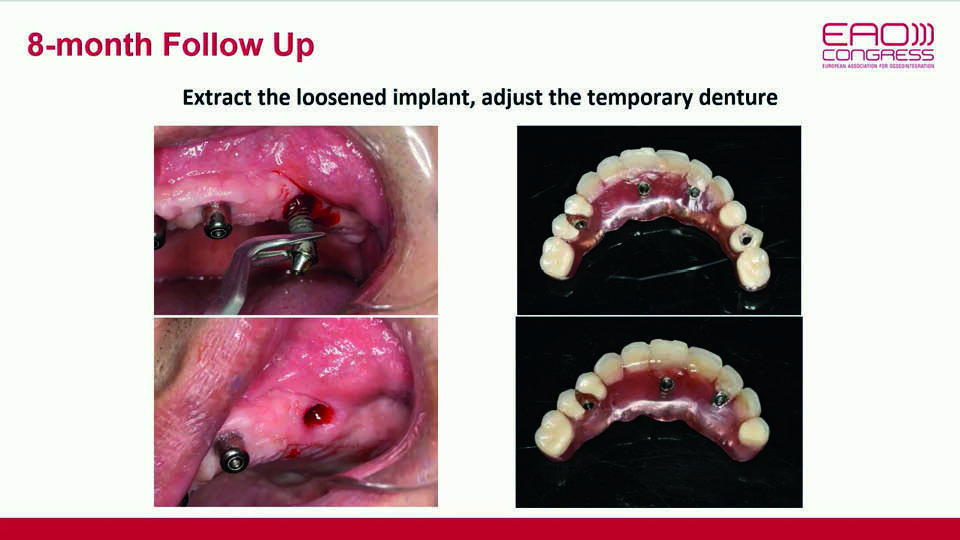 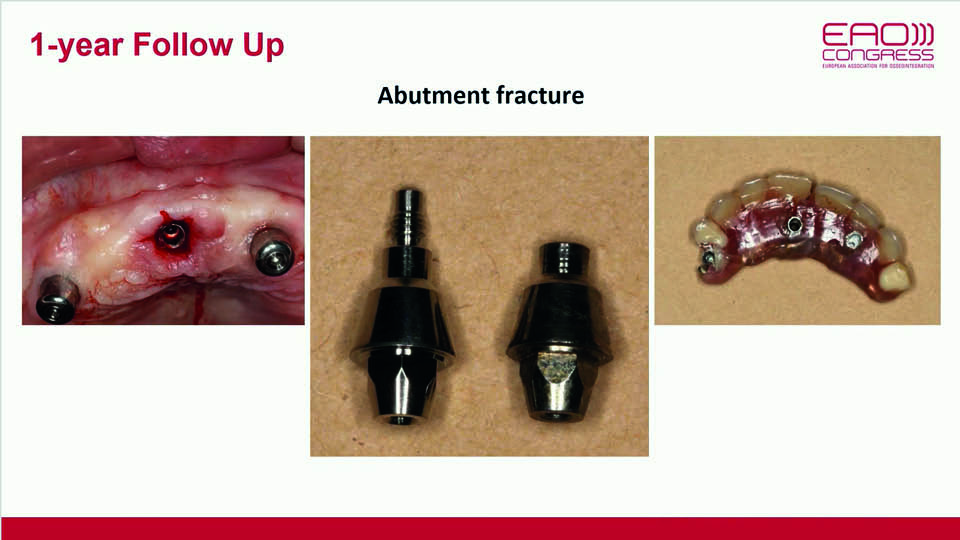 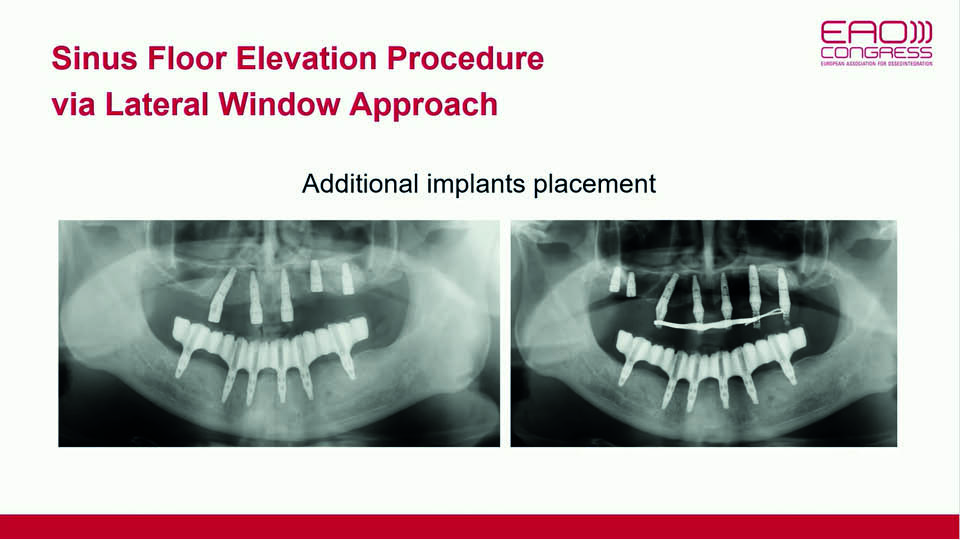 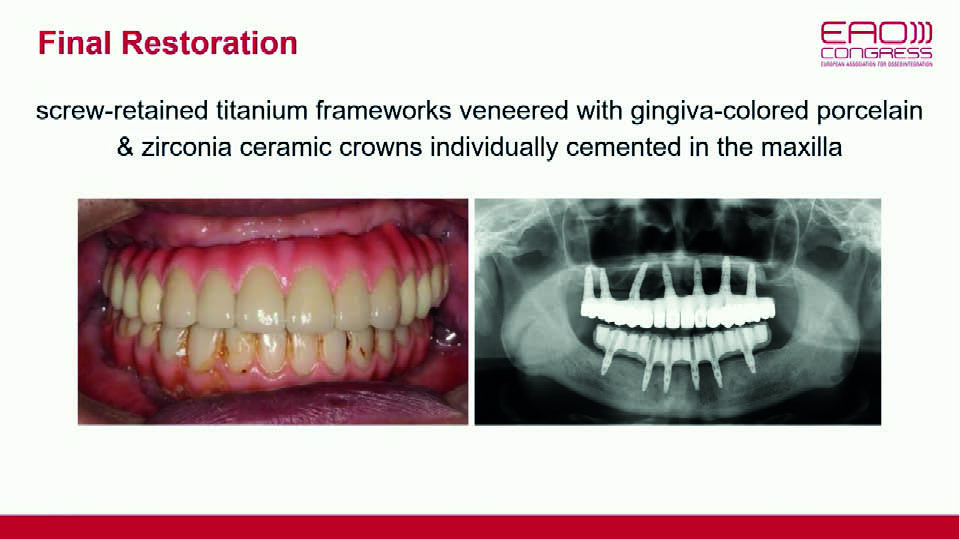 The final case presented involved a 52-year-old woman who was referred to the clinic to have two implants placed (to replace missing left mandibular molars). Two months after surgery, significant crestal bone loss was observed. There are multiple factors which could have been the cause (Oh et al., 2002).

The approach selected to combat this involved decontaminating the surface in order to promote re-osseointegration (Mellado-Valero et al., 2013). An Er:Yag laser was used, and the area was then grafted. Two months later, the peri-implant bone had regenerated and prosthetic treatment was completed.