Are stem cells the implants of the future?

Therapy using mesenchymal stem cells (MSCs) is an up-and-coming treatment avenue in implant dentistry. It is still in its pre-clinical stage, but may soon present a promising alternative for autogenous bone grafts. The benefit of using MSC therapy is that it would overcome the drawbacks traditionally associated with bone grafts (insufficient amount of bone, resorption and donor morbidity). At the pre-clinical level, the results of MSC therapy have been widely demonstrated (Shanbhag et al., 2017). The challenge now is to bridge the gap between lab and clinic.

MSCs have perivascular origins, and are found in almost all tissues in the human body. Due to their limited numbers, however, they should be isolated, cultured, expanded and even reprogrammed ex vivo. This is an alternative approach for using bone marrow as a clinical source of MSC, where stem cells make up a small (and unevenly distributed) fraction of the tissue.

As well as bone marrow, MSCs can be obtained from dental pulp or adipose tissues. Although they share many surface biomarkers, stem cells harvested from different areas have been reported to behave in different ways. Outcomes are highly dependent on the conditions of the culture and how it is manipulated in the lab, where good manufacturing practice (GMP) protocols should be followed to safeguard the cultures.

At first, MSCs from adipose tissue (ADCs) show a lower osteogenic capacity than those from bone marrow. However, they can be selectively induced to osteogenic pre-differentiation. ADCs are easily accessible from subcutaneous fat, and in vivo experiments have shown that they can be cultured on 3D scaffolds, implanted and then applied in ongoing clinical trials. Bone marrow MSCs have been shown to promote ectopic bone formation when subcutaneously transplanted in mice. However, they were reluctant to form bone in intra-oral osseous defects in humans (Meijer et al., 2008).

The speaker had been working in a line of research dedicated to bone marrow derived MSCs as part of the EU project, ‘REBORNE’[1], where various phase-II clinical trials were conducted.

The first step was protocol validation, which had recently been accomplished. A study concluded that the clinical use of MSCs, manufactured according to a specific standardised protocol (which was GMP compliant), was capable of bone regeneration (Rojewsky et al., 2019). Thereby in three weeks, a hundred million cells can be successfully delivered via syringe, even though the culturing lab is far from the clinical site. Cells are attached to granules of microporous biphasic calcium phosphate mixed with HA/TCP (Biomatlante™), in an optimal density of 10 x 106 cells in 5 cm3 of granules (Brennan 2014) (figs 1–2). In a pre-clinical study, this protocol was applied in a split-mouth mini-pig model and the regenerative potential of the MSCs was clearly demonstrated (Gjerde et al., 2017).

The next step has been a human clinical study on 13 patients with bone defects ≦4 mm wide, where implant placement without augmentation is not possible (Gjerde et al., 2018).  Cells were harvested from the marrow of the iliac crest by aspiration; they were then tested for quality, cultured and expanded in the lab at University of ULM, Germany and finally sent back to the clinical site. In Bergen, surgery was performed (with no special measures required), like a GBR membrane procedure with just any type of particulate graft. Biopsies at six months showed significant formation of new bone in all 11 patients. In two cases, the expansion of MSCs was stopped due to insufficient levels of stem cells found in the aspirate. The authors concluded that this novel augmentation procedure could even challenge the current gold standard protocol of autogenous bone grafts.

After the promising data from this study, a comparative multicentre RCT has been undertaken as part of the European project MAXIBONE[2], including 150 patients in eight clinical centres across six countries. The intention is to use personalised grafts (instead of granules) with scaffolds made with 3D printing to mimic the morphology of the defects.

Bioprinting is an interesting and relatively new technology capable of inserting osteoblast-like cells directly into scaffolds to optimise distribution. Since cell viability remains the same, this approach may prove effective in the near future. It is also possible to print the bone marrow-derived MSCs with the scaffold and the culture medium simultaneously in 3D structures with up to sixteen layers (Ojansivu et al., 2019) (figs 3–4).

The most recent evidence comes from a systematic review and meta-analysis (Shanbhag et al., 2019) and a consensus report from the 15th EWP (Sanz et al., 2019). Both concluded that cell therapies show superior results in pre-clinical in vivo studies, although these effects did not seem to be repeatable in clinical trials. There is a gap between pre-clinical models and clinical application that still needs to be overcome. Currently, thorough research suggests that MSC therapy will become a new approach in the very near future of bone regeneration. 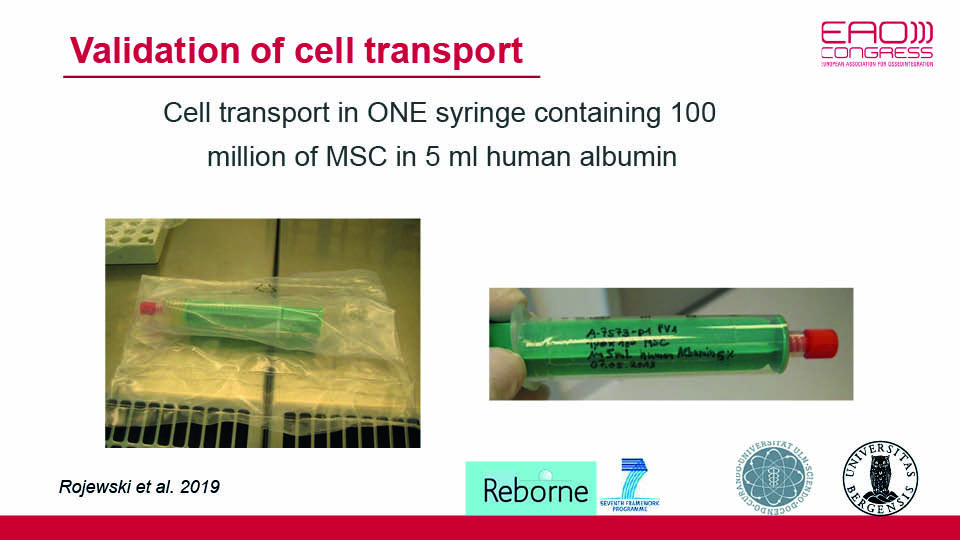 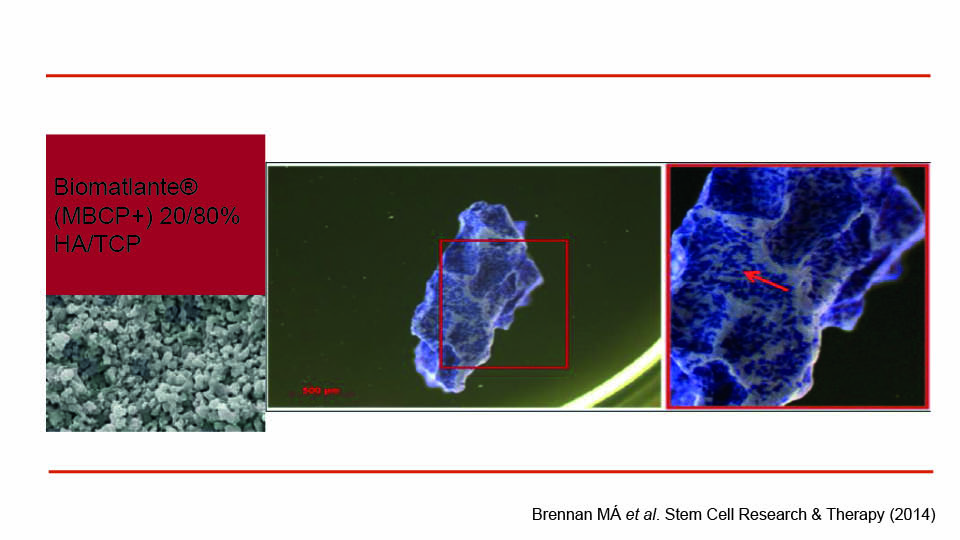 Fig 2: Cells attached to the carrier 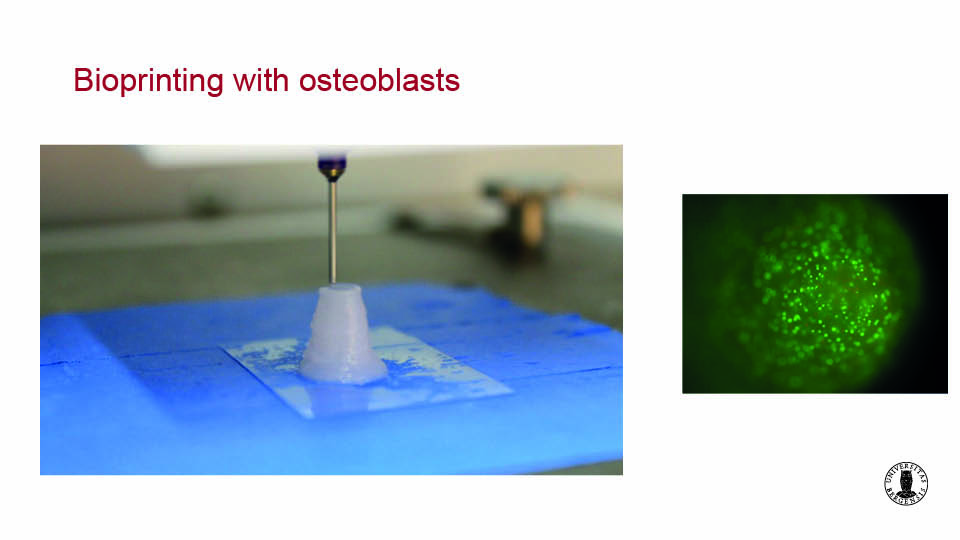 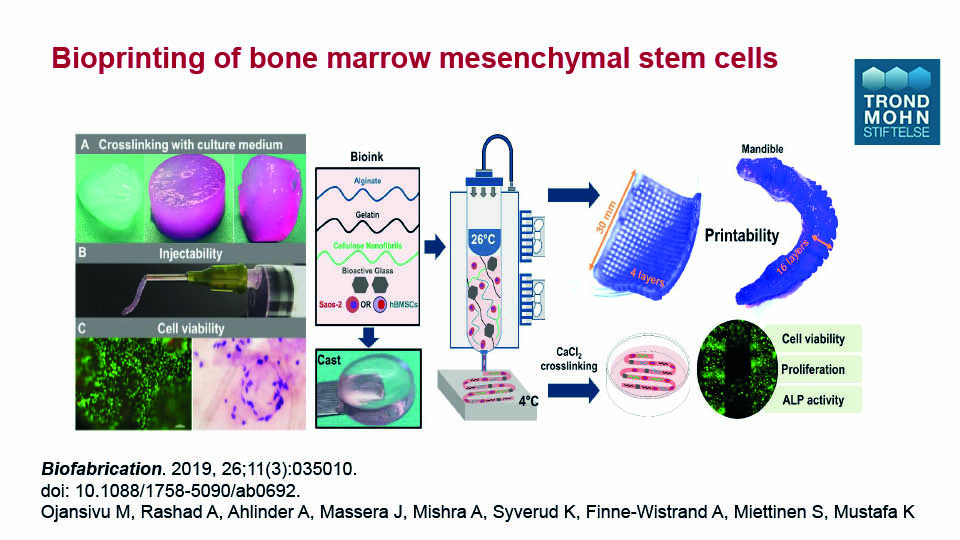 The future of bone regeneration. Understanding its biological bases

Hard and soft tissue deficiencies are a relatively common clinical problem. Decisions concerning treatment approaches should be based primarily on the type of the defect present (see for example, the classification by Benic & Hammerle, 2014). But in order to talk about the future of bone regeneration, we must first discuss with biology.

Due to the intramembranous ossification of the jaws, bone regeneration relies on a well-orchestrated interplay between connective and osseous tissues. Blood clots (as primary matrices), growth factors and stem cells are the three interacting players. On day seven of the regeneration process, angiogenesis is the key event indicating the start of bone formation. Direct ossification is then promoted by signalling proteins like bone morphogenetic proteins (BMPs), permitting mineralisation and, later, mature bone remodelling processes to take place. This takes time and passes through phases of proliferation, matrix maturation and mineralisation (fig 5).

The balanced mechanisms of bone signalling pathways should also be taken into account. These pathways form the well-established feedback processes of bone formation/resorption and resting/reversal of mineralisation. Furthermore, the recent discovery of the communication between osseous tissues and the immune system has been linked with the role of macrophages (fig 6). The speaker asked: would it be possible to regulate the switching between the two macrophage phenotypes?

But in an oral setting, bone defects are surrounded by biofilm which is always present in exposed surfaces and sends pro-inflammatory signals to macrophages. For bone regeneration to occur, it is necessary to keep the inflammation under control. This control comes from blood clot stability and protection of the wound via primary closure, both of which are closely related to surgical technique and flap handling (fig 7–8).

Based on all of this, how can we enhance bone regeneration?

Our first option may be cell therapies. In the future, these may soon be ready to implement; however, there is currently insufficient clinical evidence and there are high costs and regulations which are difficult to overcome today (fig 9).

A second option may be to improve the scaffolds and membranes which maintain the space, stabilise the blood clot and protect the wound. Jaw defects often have an unstable morphology and tend to be exposed to soft tissue pressures under oral functions. Considering this, bone regeneration cannot be achieved without proper membranes and scaffolds.

In the future, membranes will switch from passive barriers to bioactive carriers.

We currently do not know the real significance of cross-linking, neither can we be sure about the performance of collagen membranes that resorb quickly (since the duration has still not been fully determined in clinical scenarios). But future outlooks suggest that membranes will switch from passive barriers to being bioactive, and will release signal molecules activating cells to induce bone regeneration (fig 10).

In general, the current market for scaffold biomaterials (i.e. users and manufacturers) do not take into account the mechanical, chemical and structural properties really required. Like membranes, biomaterials exhibit hybrid competencies beyond ongoing osseo-conduction. European authorities do not currently support research on biomaterials from cadaver donors or animals. Given this, it is reasonable to think that the future belongs to synthetic composites made of polymers and calcium-phosphate ceramics with optimised designs for macro-, micro- and even nano-structures, and fabricated as 3D printing constructs.

Should an appropriate scaffold be available, would a membrane be required?

Experimental evidence points to membranes and scaffolds used together, and longer duration of the barrier membrane.

Regarding signalling molecules, after more than two decades of research, clinical use of BMPs is lacking. Platelet aggregates are increasingly applied in regenerative oral surgery as a source of growth factors. In an RCT split-mouth study it was concluded that leucocyte-platelet rich fibrin (L-PRF) was beneficial compared with natural healing of the socket (Temmerman et al., 2016). But a recent systematic review found no significant additional benefits in ridge preservation using PRF alone (Lin et al., 2019). Therefore, inconsistencies remain in the literature.

In future, bone regeneration techniques will likely be viewed as a toolbox for combining diverse technologies. When these techniques are available, practitioners will able to use cells, scaffolds and signalling molecules to build customised bioactive constructs. 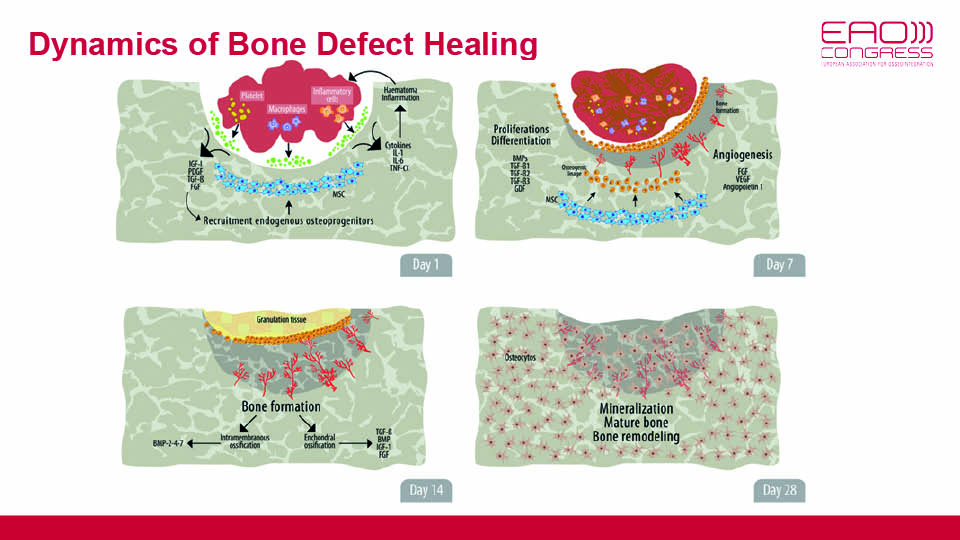 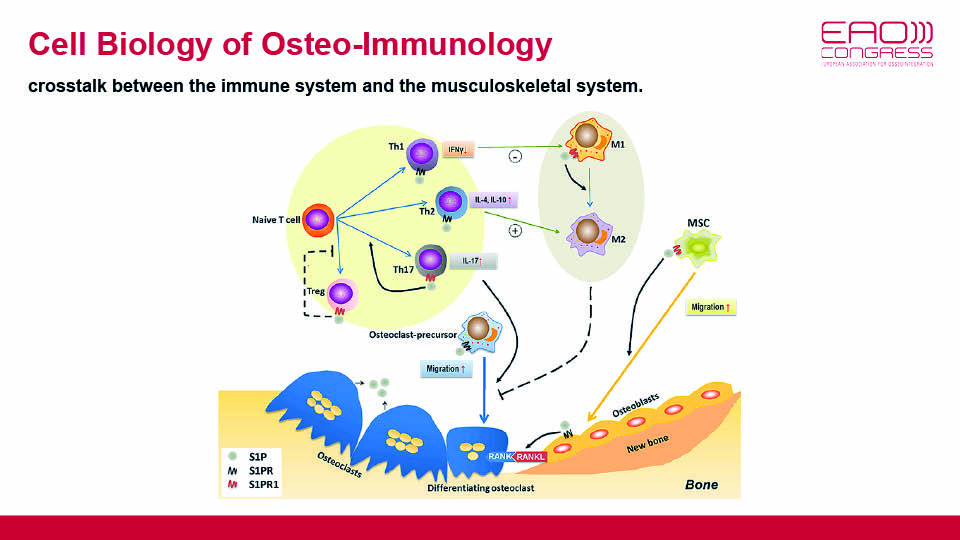 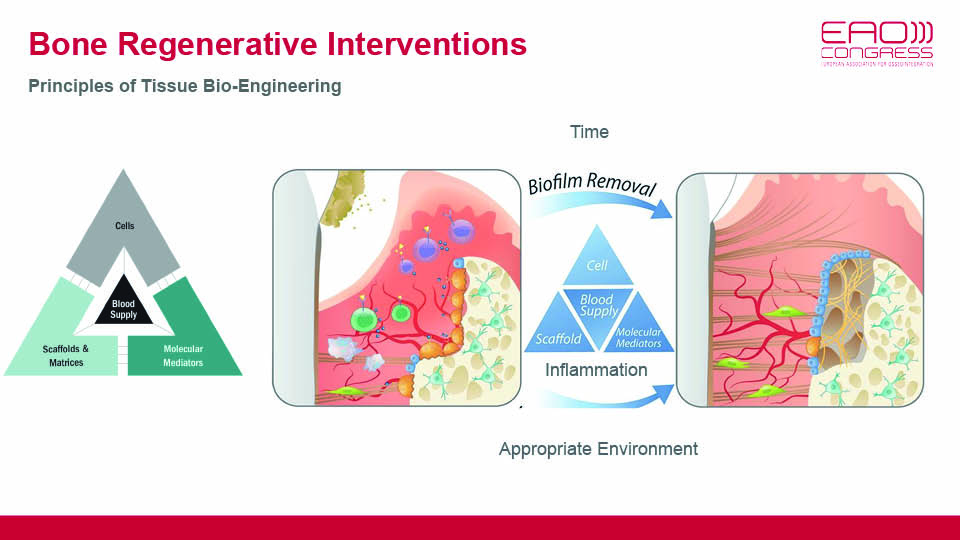 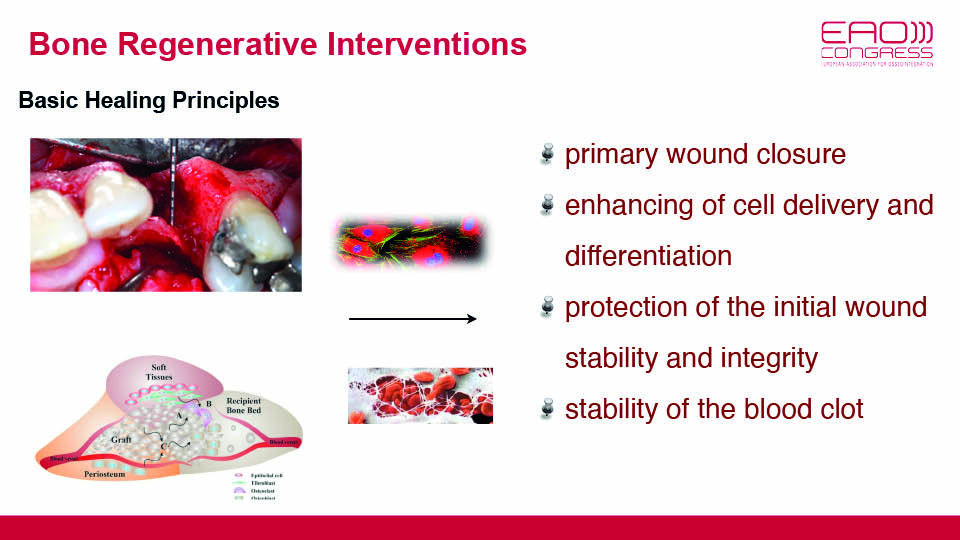 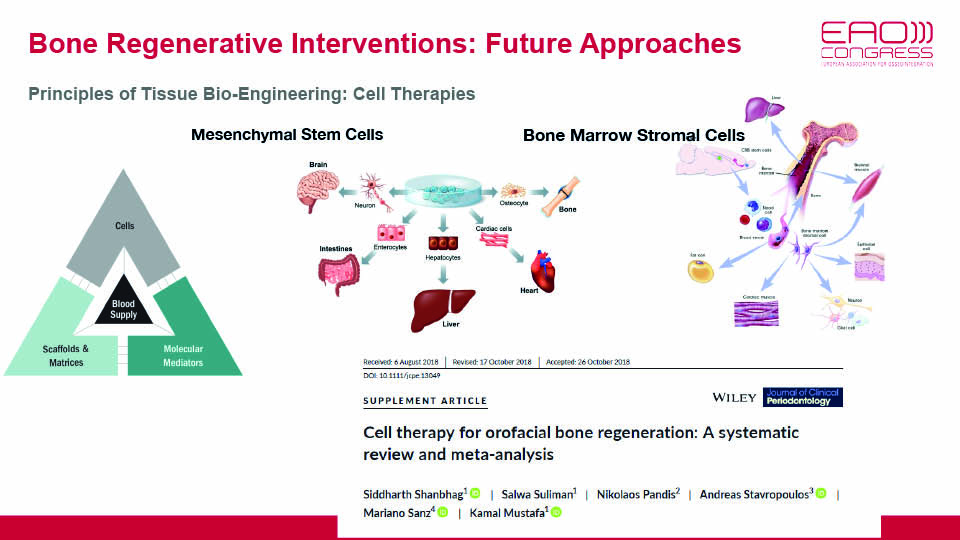 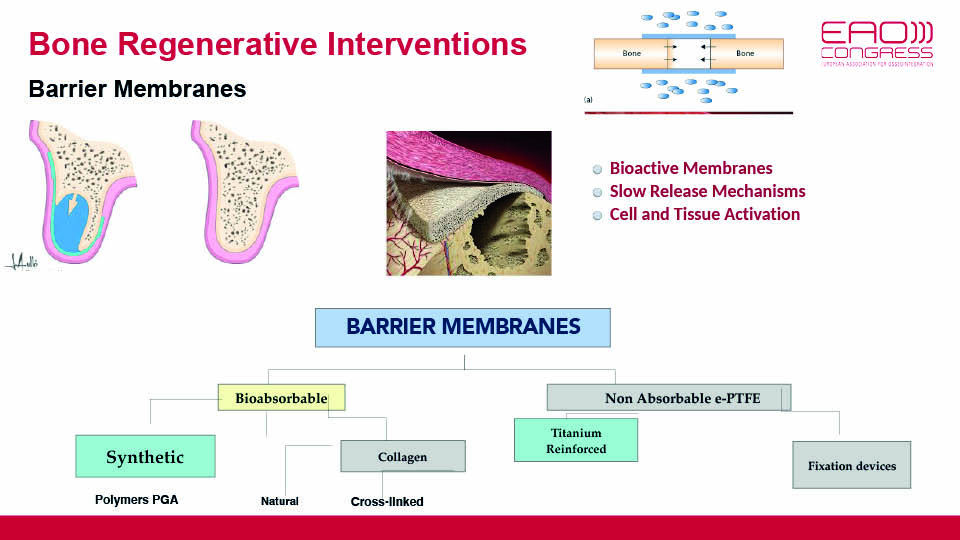