How to treat cases involving buccal bone loss after extraction

The speaker clearly stated that he recommends treating fresh extraction compromised sockets with a single flapless procedure. The aim with this approach is to preserve and, at the same time, regenerate the natural biology of surrounding tissues. In the speaker’s experience, this approach is less invasive, and is shorter and less expensive than the conventional delayed approach. Above all, it can provide more predictable results.

The immediate dentoalveolar restoration (IDR) solution can be used in cases involving compromised alveolar sockets. It is a minimally invasive technique of grafting with bone, which eventually also uses soft tissue in it at the same time (not later), taken from the tuberosity at the time of implant placement. A portion of cortico-cancellous bone is removed from the tuberosity and placed as a membrane covering some particulate autogenous bone to restore the buccal bony wall and the lost volume (fig 1–2).

It has been well documented that the procedure can achieve long-term maintenance of the new buccal bone volume (Rosa et al., 2014; Rosa et al., 2016). The height of restored papillae have also been shown to remain stable, preventing subsequent marginal recessions.

As part of the procedure, it is recommended that the implant is placed palatally (after having been planned by a CBCT). The speaker said there should be 3mm between the implant shoulder and the gingiva on the buccal side. If there is 3mm of bone at the buccal aspect, a soft tissue graft to compensate won’t be needed.

When harvesting the bone graft from the tuberosity, the chisel should be angled perpendicular to the bone wall (or as much as is possible). As soon as the chisel goes deeper, the angulation should be adjusted progressively. The graft can then be reshaped according to the defect configuration and placed 1mm coronally to the implant position. The gap between the implant and the cortico-cancellous shield is filled with particulated bone also obtained from the tuberosity. An immediate temporary crown is finally screwed onto the implant without occlusion. A 2mm gap should be left to allow the soft tissue to grow inwards (fig 3–4).

If a patient presents with severe gingival recession, the speaker described a variation of the IDR protocol which should be used: the triple graft technique (da Rosa 2014). The ‘triple’ graft is a combination of connective tissue, cortical bone and particulate cancellous bone. It is harvested from the tuberosity using a scalpel and chisels. The graft is placed with the connective tissue layer facing the gingiva, and the cortical and cancellous bone facing the implant. A single suture in the middle is used to fix the graft in place, and two more sutures are used on each side in the papillae. A temporary crown is screwed with its margin levelled to the neighbouring teeth, without soft tissue recession, and leaving a gap for the tissue to grow in (fig 5–6). The speaker presented a case where this procedure was successfully used, with a 10-year follow-up. This technique can be applied even in cases where several bone walls have been lost, using autogenous block and particulate bone compacted through site preparation (da Rosa et al., 2019).

The final case presented by the speaker involved two central incisors which could not be maintained, with complete loss of the interdental papillae and partial loss of the lateral papillae. In this case an orthodontic approach was selected prior to surgery and extrusion was performed in order to gain bone and soft tissue vertically. After that, the incisors were extracted and the IDR technique was used. 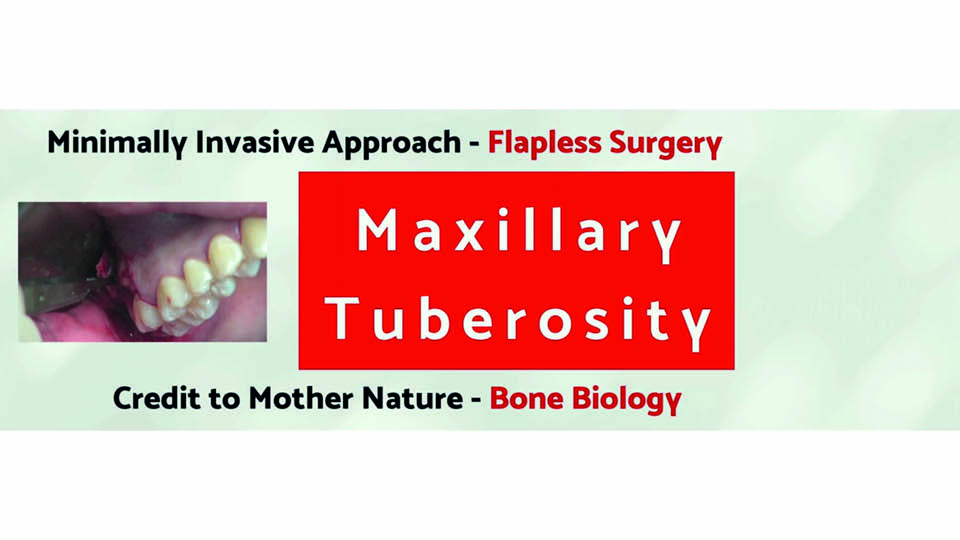 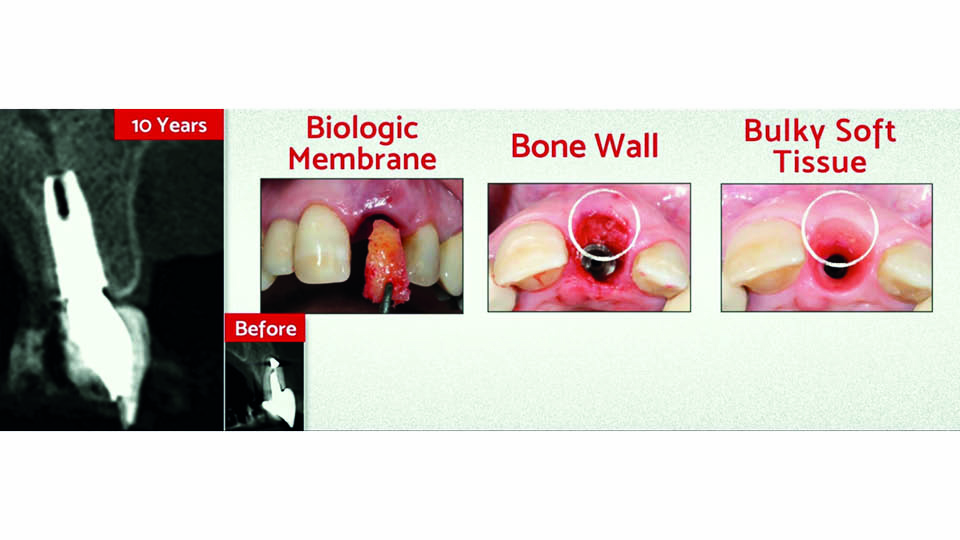 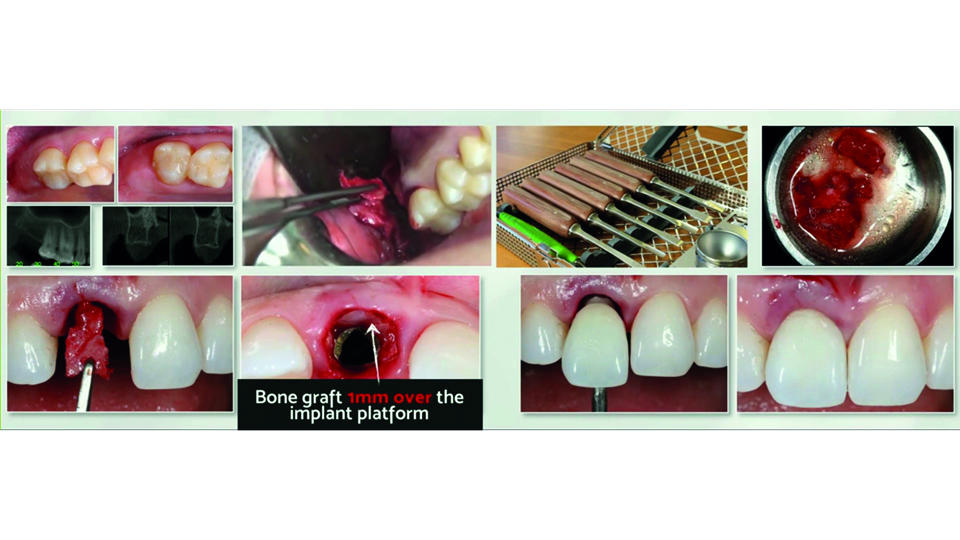 Fig 3: Harvesting the graft with chisels 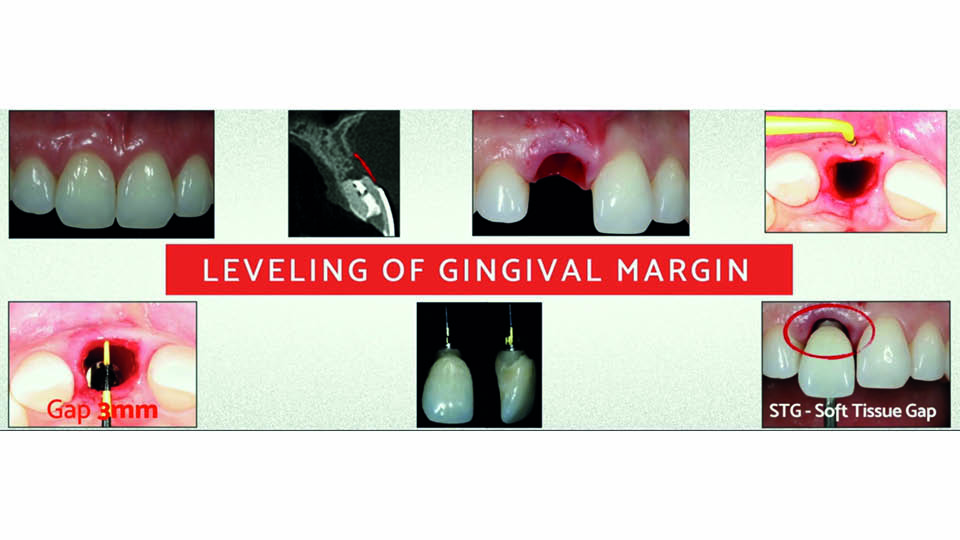 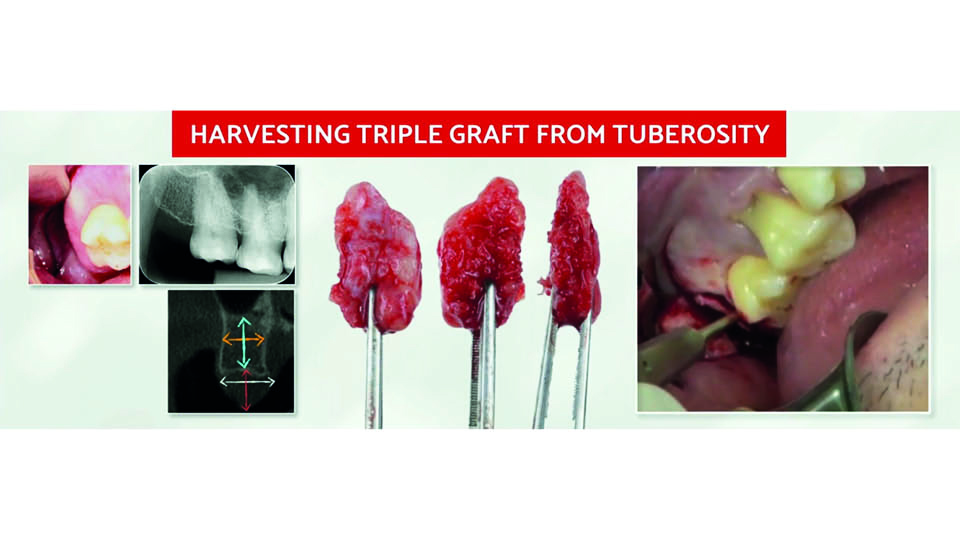 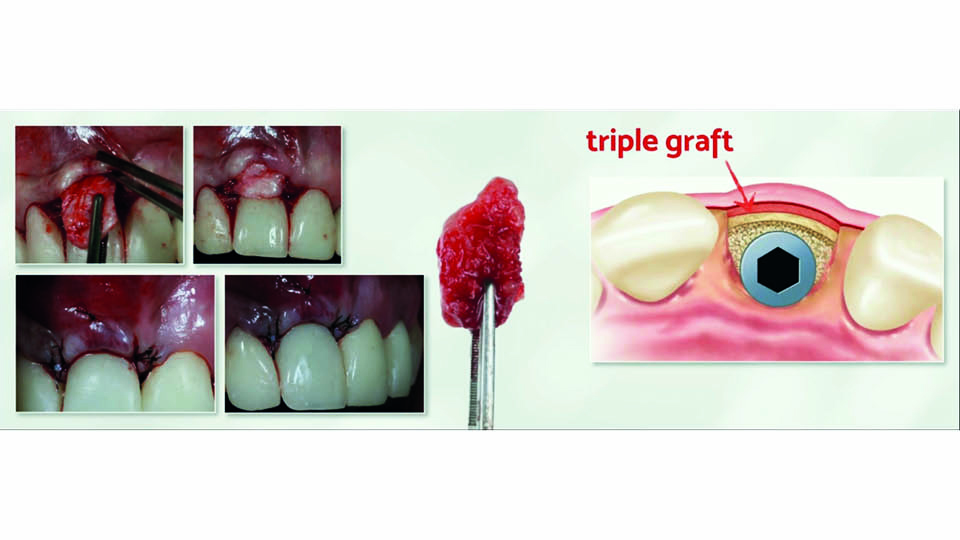 L-PRF preparation is subject to the following strict (but simple) protocol. Blood is centrifuged for 12 minutes in 8–16 tubes with silica coating, without any additives. If the patient is receiving anticoagulant treatment, their blood should be centrifuged longer. Once the tube is filled, centrifugation must begin no more than one minute after blood extraction, otherwise sub-optimal membranes will be formed. The centrifuge should be initially set up with two tubes; more tubes are then added, always two at a time in order to keep the centrifuge balanced.

The technique is performed with L-PRF alone, which acts as a scaffold. After extracting the tooth and removing the granulation tissue, at least three or four L-PRF membranes (or ‘plugs’) are inserted into the socket and condensed. The speaker then explained that the socket must be sealed by one or two more L-PRF membranes placed around the entrance to the socket in an envelope between the periosteum and the bone (by tunnelling the mucoperiosteum).

No post-surgical corticosteroids or antibiotics are needed, since the graft is 100% autogenous and rich in leucocytes. The speaker described some cases involving successful buccal bone plate regeneration three months after L-PRF ridge preservation.

In cases with major bony defects, the recommended approach is to use the L-PRF bone-block technique. For this, the graft should be a combination of L-PRF membranes divided into small pieces and mixed with bone substitute in a 1:1 ratio. Liquid fibrinogen, obtained with the same centrifugation method but with plastic coated tubes and three minutes of centrifugation, is added to this mixture to obtain a ‘strong’ block. The fibrin bone block obtained in this way will have appropriate mechanical qualities for bone regeneration. The block is covered with a collagen membrane which is further covered by L-PRF membranes; the latter of which is to improve the soft tissue healing above. Both membranes should be pinned to improve the stability of the graft (fig 9). This technique has been reported to achieve a mean horizontal ridge augmentation of 4.5mm, and a mean resorption rate during the healing phase of 16% (Cortellini et al., 2018). 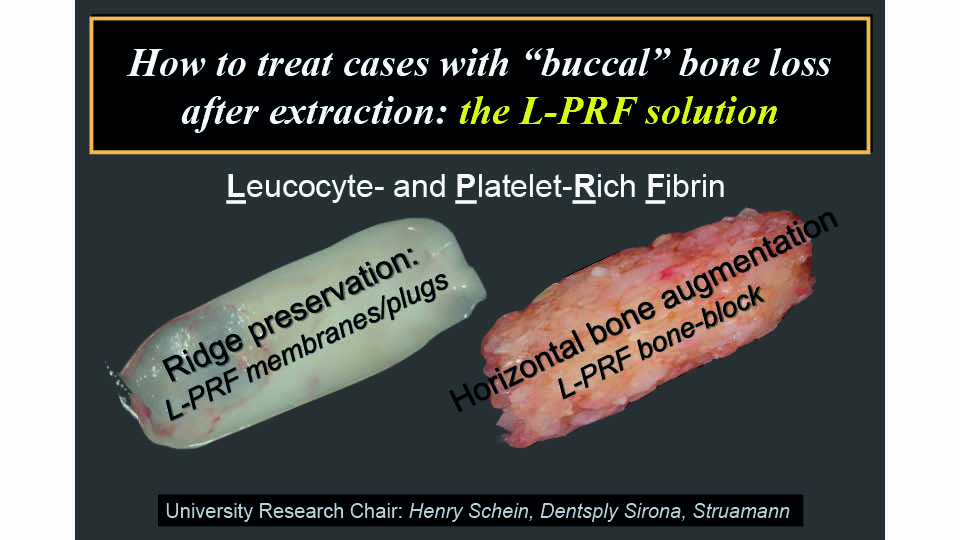 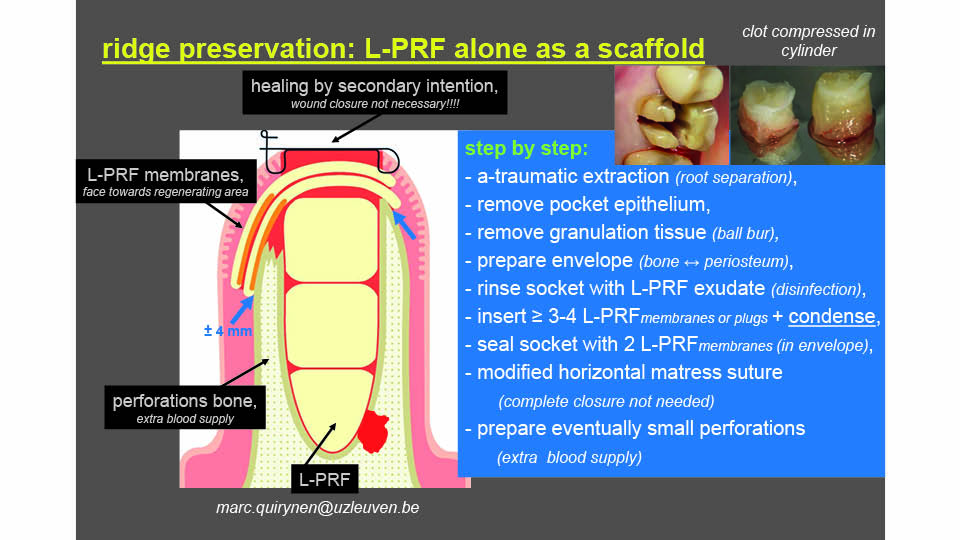 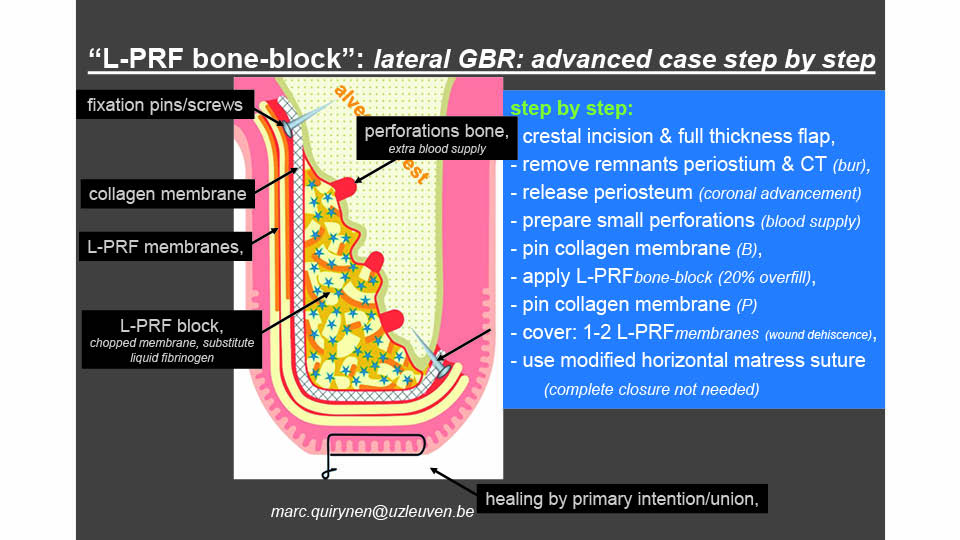 There are several well-known techniques used to compensate for tissue changes following tooth extraction (Chappuis et al., 2017). Of these, the most commonly used is to rebuild the buccal part of the socket by bone grafting. Since the mid-90s, however, different soft tissue techniques have been proposed to build up the lost volume and seal the socket. A recent RCT compared CBCT images of guided bone regeneration (GBR) and soft tissue grafting, and concluded that both procedures were equally effective in the short term (De Bruyckere et al., 2018). On the other hand, however, a lower percentage of mineralisation has been observed in sockets where biomaterials are used (12%) compared with natural healing (50–60%) (Araujo et al., 2015).

The approach presented here by the speaker, for immediate implant placement in a defective socket with buccal bone wall loss, is based on a similar approach: let the socket heal naturally and protect it with a soft tissue graft. The implant should be placed palatally, allowing the blood clot to occupy the buccal space and form new bone. Next, a connective tissue graft is performed using a bilaminar tunnelling technique. This graft compensates for the loss of buccal volume and seals the socket (fig 10).

The speaker said he realises that this approach may be viewed as controversial, as it doesn’t pretend to fully recover the bone loss. But, he stated, we must accept that it can successfully maintain the total buccal volume of the socket, allowing us to opt for an immediate restoration.

Technically, the critical step in this technique is to create an adequate bilaminar bed for the soft tissue graft in a mean buccal mucosa thickness of 0.6mm. Part of the connective tissue graft is left exposed, to close the socket. The speaker showed several successful cases with 5–6 years of follow-up (which were progressively more difficult and complex); he also showed some recent cases with promising results (fig 11–12).

In cases involving extensive damage to the buccal bony wall, a second connective tissue graft may be needed. This technique – compensating alveolar socket seal (CASS) – has been used in 389 consecutive patients in the last ten years, on 414 implants, without biomaterials, with a 98.8% survival rate. Re-grafting with another CTG was needed in only 11 cases (data non published yet).

The speaker summarised the pros and cons of the CASS technique thus: 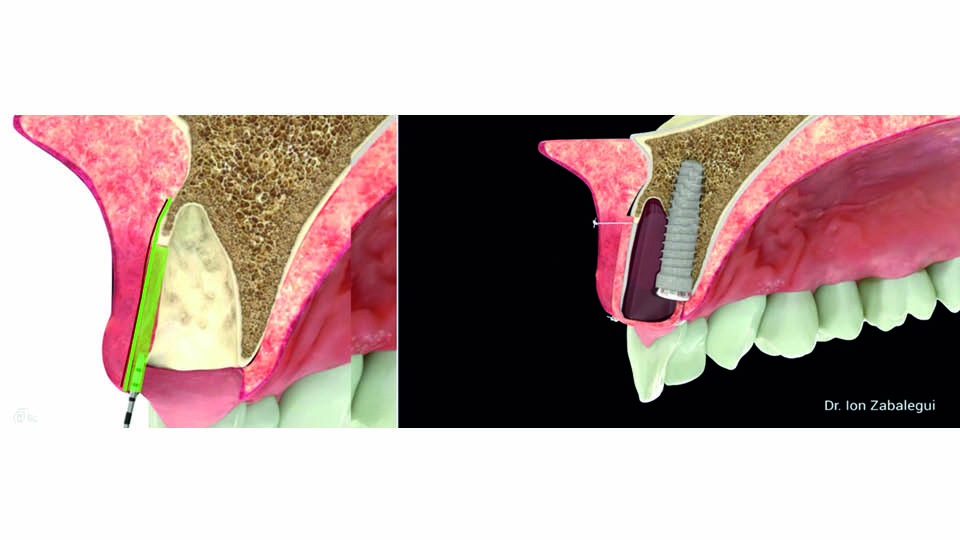 Fig 10: A CTG compensates the loss of volume 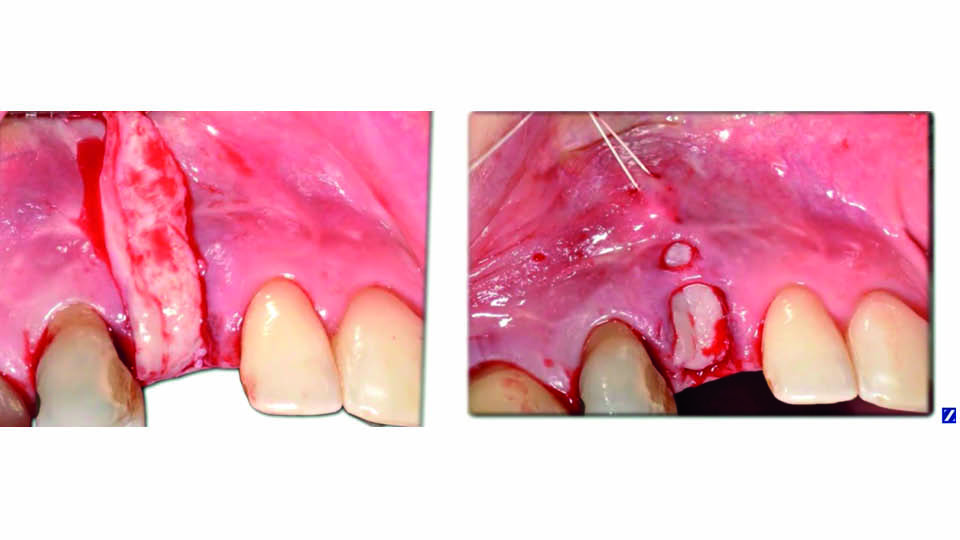 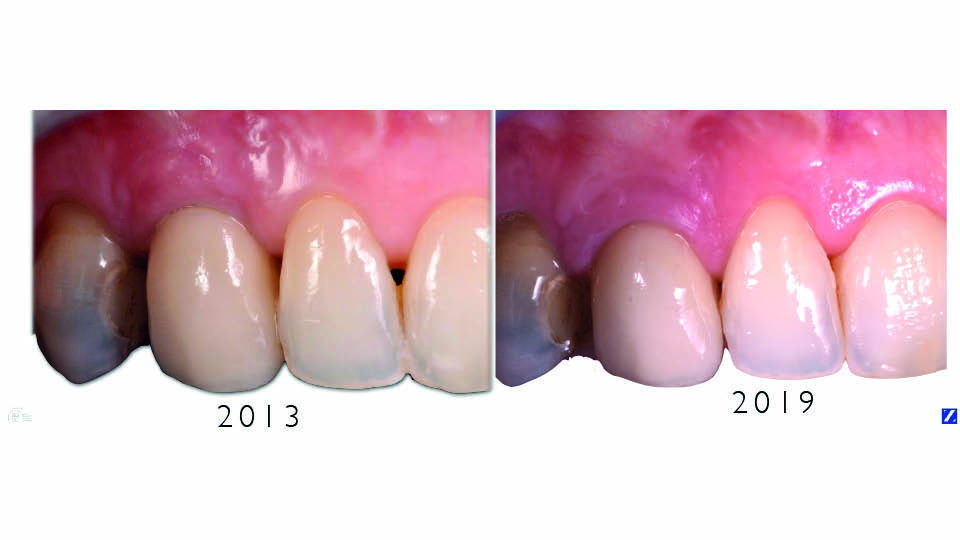