Should we avoid implants in the aesthetic zone?

Placing implants in the aesthetic zone

Risk assessment: the key to success

Placing implants in the aesthetic area is a great challenge for clinicians, due to numerous pitfalls found in daily practice. The speaker stated that a correct risk assessment is key, so we can understand which factors contribute to the success or failure of our cases.

Post-extraction remodelling is the issue

The first factor to consider when placing implants in the aesthetic area is the alveolar atrophy that occurs after tooth extraction. It is well known that the mean facial reduction of the ridge is about 2.5mm (Araujo et al., 2005). An even greater rate of resorption was observed in a primate model, reaching 70% reduction in the coronal third and over 40% in the middle zone (Min et al., 2016; Omran et al., 2016; Su et al., 2017).

How much volume reduction can be expected?

The width of the buccal bony wall represents the bone phenotype, and should be considered a risk factor due to the different response to tooth extraction. Thin phenotypes (buccal width < 1mm) tend to show a reduction of about 50% of the volume, whereas thick phenotypes (buccal wall > 1 mm) have volume reduction of less than 20%. It has also been reported that bone resorption is greater in central incisors and canines than in laterals and premolars (Cosyn et al., 2016). As well as thin phenotypes, a short gap (distance between implant platform and buccal bone wall) is an important risk factor (Ferrus et al., 2010).

How to avoid un-aesthetic margin recession

In general, the more buccal the position of the implant shoulder, the more frequent and the greater the mid-facial soft tissue recession (odds ratio of 17.4) (Cosyn et al., 2012) (fig 1–2). The ideal 3D implant position is 2mm from the vestibular wall and 1mm below the bone level.

Secondly, bone remodelling tends to correlate with gingival biotype. A thin peri-implant mucosa can increase bone loss in supracrestal implants. It has been shown that when soft tissue thickness is low, a more subcrestal positioning of the implant can help avoid implant exposure (Vervaeke et al., 2018).

In cases involving bone dehiscence, higher levels of volume reduction can be expected, reaching 90% in the most coronal third. This could lead to early implant failure, lower levels of bone formation, greater horizontal resorption and higher incidence of marginal recession. In these cases, it is preferable to use a delayed implant placement approach. Different devices have appeared on the market (fig 3), such as SocketKAP™ or SocketKAGE™, to improve ridge preservation and repair sockets with dehiscence defects (Zadeh et al., 2015).

On the other hand, grafting is associated with lower levels of bone loss. A recently published RCT concluded that bone loss is greater without grafts (2.5mm) than when grafts are used simultaneously (0.35mm) with implant placement (Sanz et al., 2017).

Another option for avoiding margin recession could be to perform a connective tissue graft at the moment of implant placement (Yoshino et al., 2014; Migliorati et al., 2015; Zuiderveld et al., 2018). The mean recession observed went from 0.5mm (without graft) to 0.1mm (with graft).

When recession has occurred, what can be done?

The speaker presented several clinical cases which were resolved with the VISTA technique (vestibular subperiosteal incision tunnel approach). This technique allows bone and soft tissue grafting to be performed at the time of implant placement. The speaker stated that his preference for connective tissue was to use tuberosity as the donor area, as he has found it to be more stable.

Other factors such as platform switching and microtextured implant surfaces can also help prevent buccal dehiscence and improve the preservation of hard and soft peri-implant tissues. Finally, figure 4 summarises the different approaches recommended by the speaker. 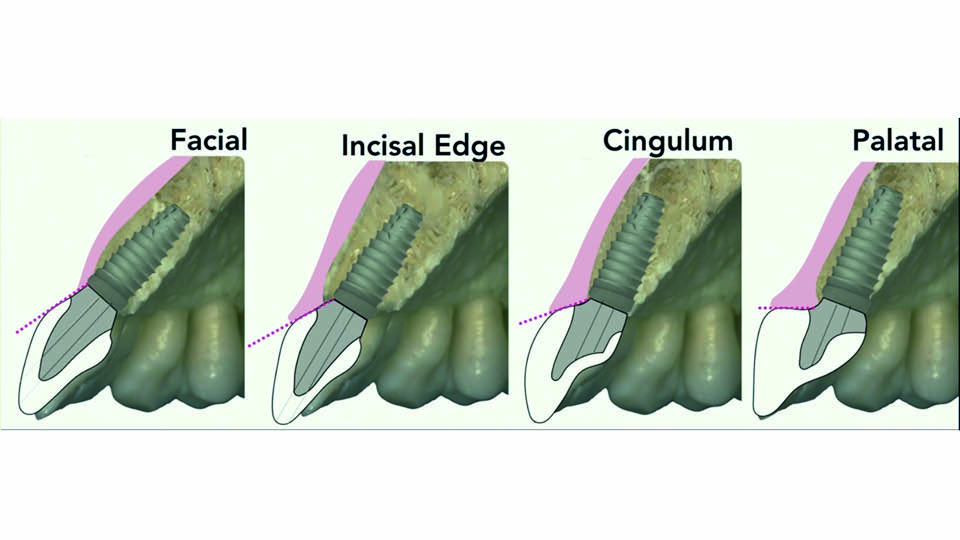 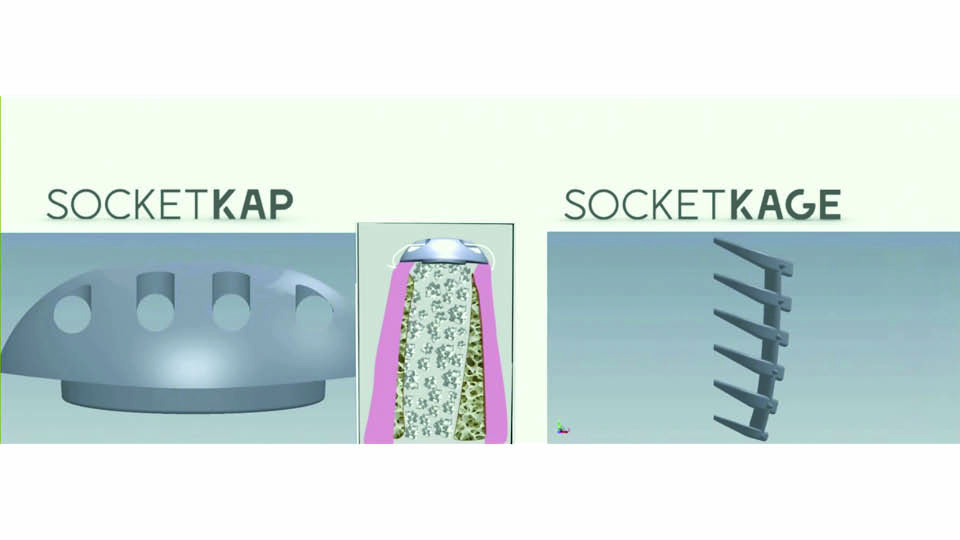 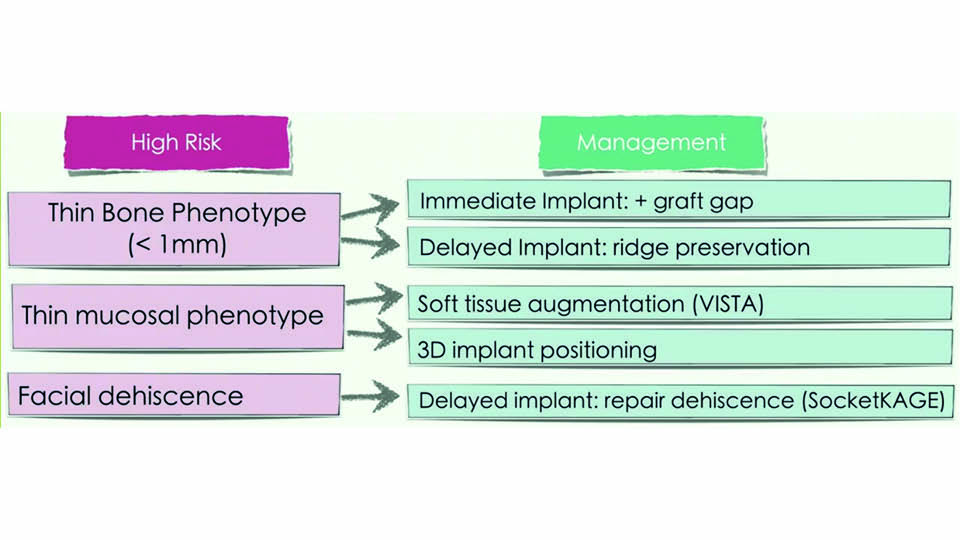 Fig 4: Approaches recommended by the speaker

No implants in the aesthetic zone

The use of dental implants in the aesthetic zone is one of the most important challenges of dentistry. To deal with this challenging area, we should keep an open mind, and consider possible alternatives to implants and think about other possibilities that we have perhaps forgotten.

Are the beautiful cases usually presented representative of real life?

The clinical reality seems to be different to what is presented in professional meetings. The speaker gave examples of several problematic cases which he had encountered in practice involving poor implant placement in the aesthetic area. These cases were a nightmare for the patient and required a great deal of therapeutic effort to correct. He cautioned the audience that the ‘beautiful’ cases that are sometimes presented may not always show the true extent of work required for the case (fig 5).

It is well known from the late sixties that implant placement in very young patients leads to disastrous results. This is because the jaws continue to grow, but peri-implant tissues do not. Even between the ages of 30 and 40, the alveolar process is still growing. Placing implants in the upper incisor area can therefore have a high aesthetic impact, due to the continued eruption of adjacent teeth (Huanca et al., 2017). Another study on implants placed in the premaxilla observed infra-occlusion in 73% of patients, and found it was more pronounced in women than men (Cocchetto et al., 2019).

We are still a long way away from our goal that implants could match the evolution of oral tissues over time. The speaker therefore outlined a number of potential alternative solutions for young and middle-age patients (fig 6).

Palatal implants may be a good solution in young patients, despite the long lever arm (Wehrbein et al., 1996).

These are a very good alternative, especially for lateral incisors, and have a success rate of 92% (Kern et al., 2017).

This is a solution that was proposed in the late seventies (Tegsjö et al., 1978). It consists of: root canal treatment; then extrusion; followed by stabilising for two weeks; a two-month healing period; and finally, preparations for receiving a crown (Kahnberg et al., 1988).

Orthodontic extrusion is particularly indicated for bone fractures. It requires root canal treatment; and it is a good alternative to maintain dental structure.

In cases involving missing lateral teeth, the canines can be moved to the position of the missing laterals; implants are then placed in the premolar positions, which is easier to manage.

In some cases, appropriate endodontic treatment can solve the problem without extracting the teeth.

In a case involving infrabony fracture, a central incisor needed to be extracted. An included mesiodens was extracted and transplanted to the extraction socket. The crucial factor was maintaining the integrity of periodontal ligament. Reported success rates for this technique are in the range of 75.3–91% (Machado et al., 2016).

The management of external cervical resorption through endodontic treatment and composite reconstruction is another successful alternative (Patel et al., 2018).

The speaker concluded by presenting his own daughter’s case, which involved external cervical resorption. He said that the best treatment option did not involve implant therapy, but in fact root canal treatment and restoration with a composite of resorption. 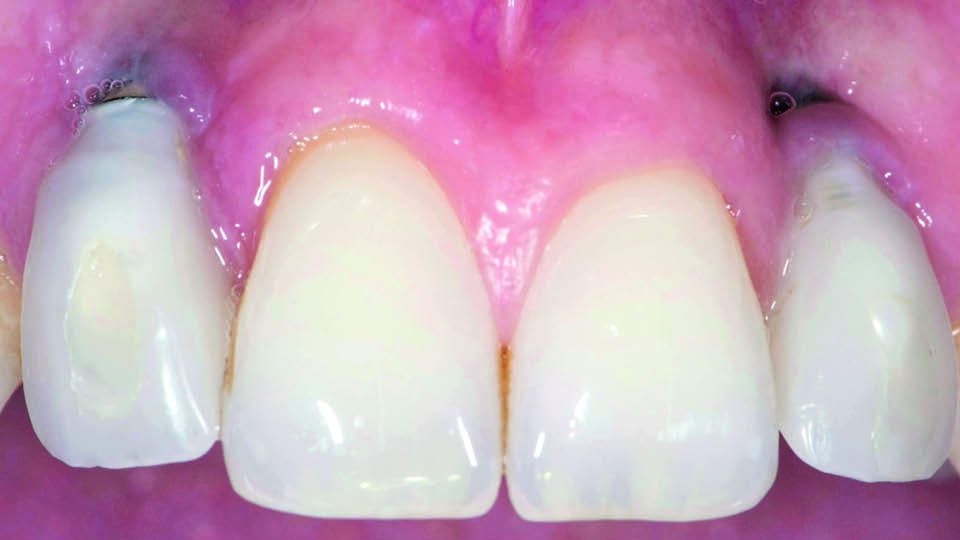 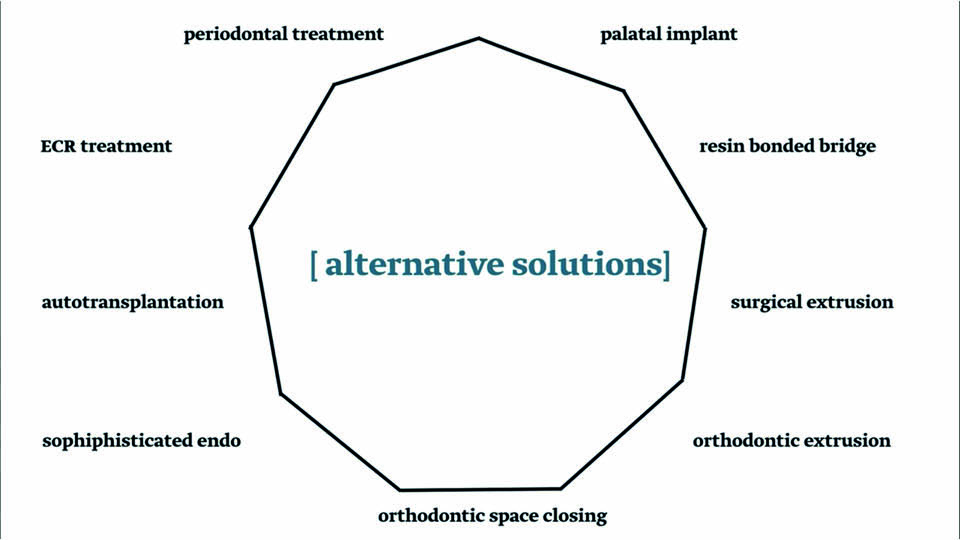