A growing problem: recessions around implants

How to prevent recessions around implants

Treatment goals should be viewed in the long-term

Our main treatment goal should be long-term aesthetic and functional success. This is closely associated with peri-implant stability of hard and soft tissues. Therefore, as well as having osseointegration as our basic objective, soft tissue integration is another pre-requisite for implant stability.

Tissue structure around teeth and implants is different

Peri-implant tissue structure is the underlying cause for the high rate of recessions around implants. The connective tissue around an implant is more like scar tissue, with fewer fibroblasts and more collagen fibres than normal tissue. These collagen fibres are oriented parallel to the implant surface. Vascularisation of peri-implant tissues is lower than that of the periodontium. Hence, the healing and regenerative capacity of soft tissue around implants is lower than that of natural teeth; the occurrence and treatment of recessions should therefore be considered with this difference in mind.

But the main cause of recessions around implants is the dentist, as they can be at fault in the following ways:

The thickness of the mucosa translates to peri-implant bone loss

A mucosa thickness of 2mm is considered the parameter for predicting peri-implant bone loss. It has been shown that after one year, significantly more bone was lost in thin phenotypes (< 2mm) than thicker types (Puisys et al., 2015). Therefore, to augment mucosal thickness in cases involving thin phenotypes, reinforcing the biological seal and facilitating plaque control is recommended. The speaker uses a modified coronally advanced tunnel technique combined with a connective tissue graft to rebuild the contour of thin-tissue recessions. This surgical approach should be combined with the appropriate prosthetic procedure (Jurczyck et al., 2017) (figs 1–4).

A recent systematic review concluded that, despite the limited evidence, a lack of attached keratinised mucosa around implants makes them more prone to plaque accumulation, inflammation and recessions (Iorio-Siciliano et al., 2020).

To prevent recessions, we should consider whether the following are present: 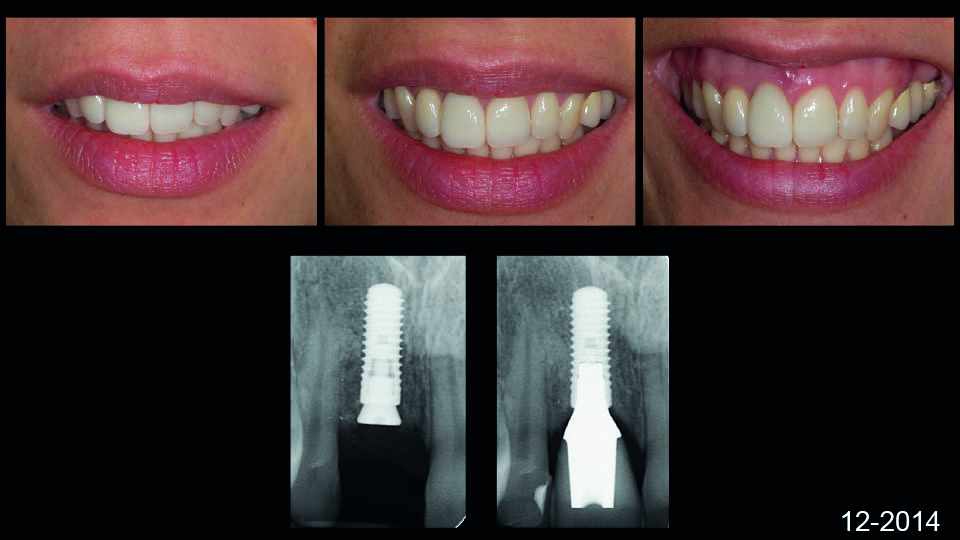 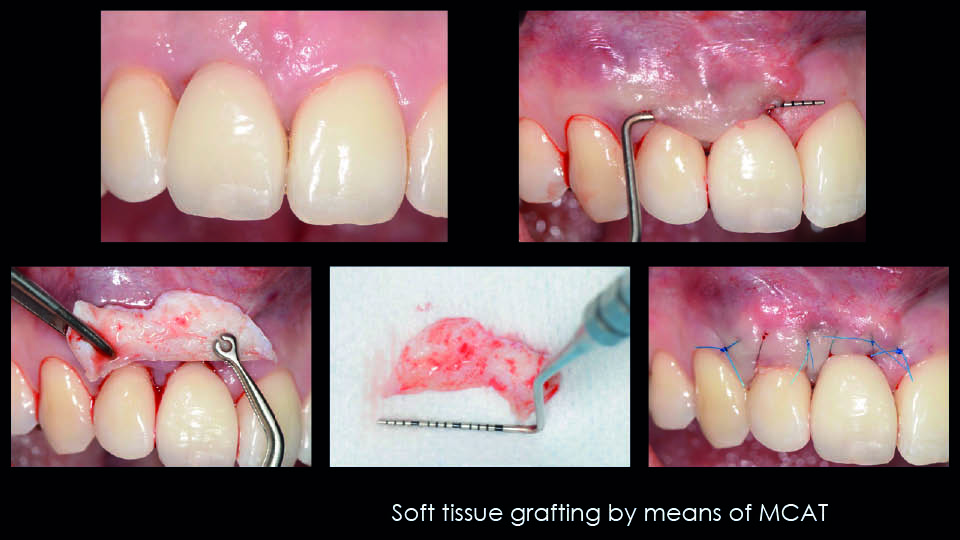 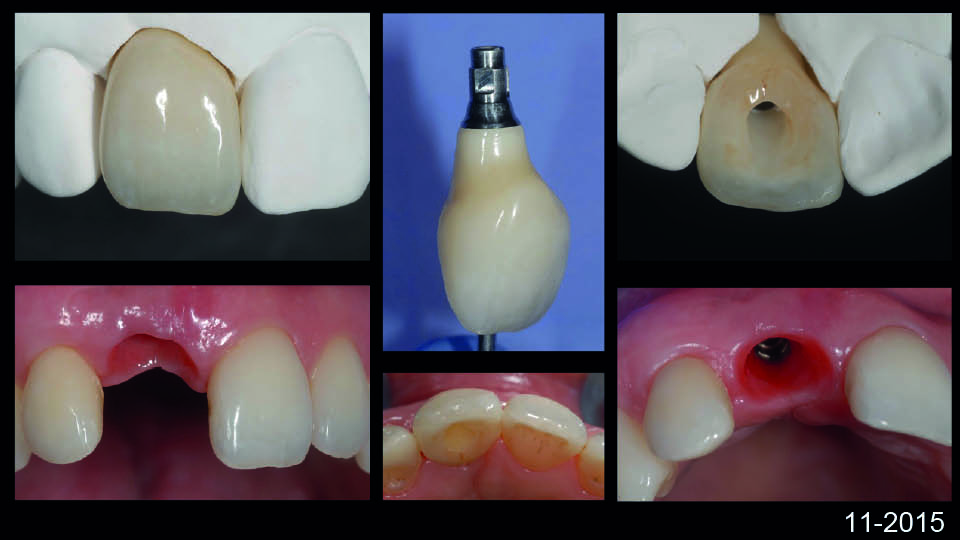 Treatment of recessions around implants with the tunnel technique

From a clinical perspective, there is a difference between the risk factors associated with soft tissue dehiscence around implants and aetiological factors that can cause gingival recession.

The risk factors for tissue dehiscence around implants have been well documented (fig 5):

The MCAT technique was first described to treat multiple gingival recessions (Aroca et al., 2010; ibid, 2013). However, it can also be performed for implant recessions.

The technique uses a full-thickness tunnelised flap, and is performed without a blade in order to keep the periosteum intact. The flap should be extended beyond the mucogingival line, where collagen and muscular fibres should be cut to free the flap from attachments. The implant surface is then thoroughly cleaned and a connective tissue graft is harvested from the palate and placed under the tunnelised flap. Finally, sliding sutures are placed to coronally mobilise the flap and completely cover the graft.

The distance between the tip of papilla to the contact point

The MCAT technique has been shown to give predictable results in multiple type III gingival recessions. The distance between the tip of the papilla to the contact point at the baseline is used as a prognostic parameter to show the root coverage achievable by the MCAT. When the distance measures ≦ 3mm in the maxilla, the probability of full coverage is 89%; in the mandible it is only 34% (Aroca et al., 2018).

The speaker presented some complex cases which were successfully treated with the MCAT technique. In one case, the patient rejected the autogenous soft tissue graft and so the speaker opted to use MCAT plus collagen matrix to increase soft tissue levels six months before extraction. The tooth was then extracted and socket preservation was performed. After another six months the site was ready for implant placement, and, as the patient became more confident, a simultaneous connective tissue graft could be performed. One year after everything was stabilised, the definitive prosthesis was done.

The message is to prevent recession around implants 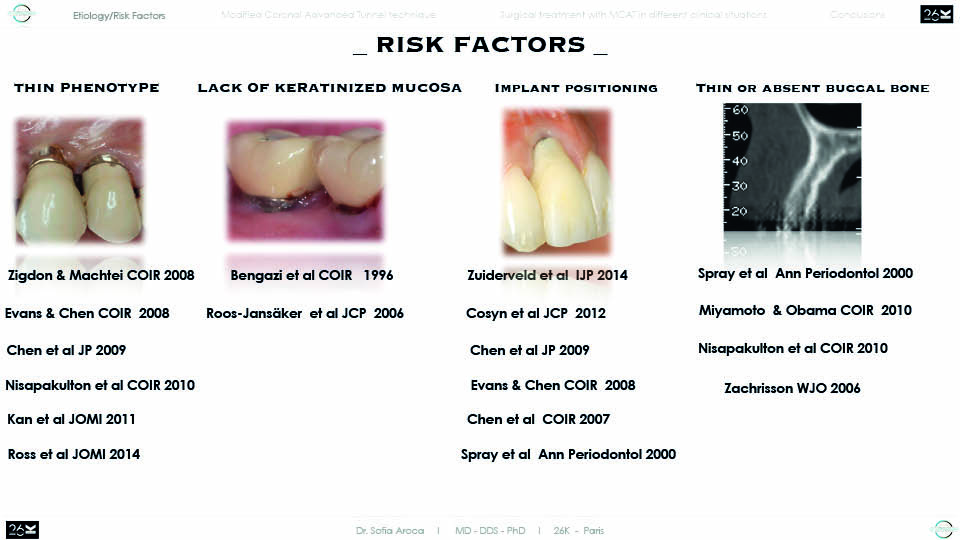 Treatment of recessions around implants with the VISTA technique

Recessions around implants are a common problem. A systematic review revealed that 11% of immediately placed implants develop buccal mucosal dehiscence (Khzam et al., 2015). Another study focused on conventionally placed implants and found that the incidence of mucosal recession over 1mm was 61% (Oates et al., 2002). It can therefore be concluded that this is a frequent complication.

Treatment methods for root coverage around teeth have evolved over the years. They have become increasing predictable and currently employ a combination of tunnel access or coronally advanced flaps together with connective tissue grafts or soft tissue substitutes (Cortellini et al., 2012). Around implants, however, it is not yet clear which technique is the ‘gold standard’ (fig 6–7).

The evidence found in the literature is still limited and the results reported are variable. So far, the use of a coronally advanced flap combined with a connective tissue graft is considered the best option, with a success rate of around 90%. But these results should be taken with caution as they may be due to the operator’s skill and may depend on rigorous case selection (i.e. only single, healthy implants with adjacent teeth without interproximal attachment loss).

The vestibular incision subperiosteal tunnel access (VISTA) technique was first described in 2011 (Zadeh et al., 2011). Unlike conventional tunnelling approaches, which use only a small intrasulcular incision, VISTA adopts an approach from a remote surgical access in the vestibule. A vertical incision is made in the vestibule, followed by the elevation of a subperiosteal tunnel towards the gingival margin. The tunnel releases the tension of the flap so a graft can be placed inside. The dissected tunnel is then coronally repositioned by horizontal mattress sutures bonded to the buccal surface of the teeth that anchor such coronal advancement and maintain it during the healing period (fig 8).

Removing the implant may be the only solution in unfavourable cases

Some cases should not be selected for treatment. This is because recessions are highly dependent on underlying risk factors (i.e. implants positioned too buccally, narrow inter-implant distance or peri-implantitis).

When indicated (the implant is healthy, the placement is in the right position and the bone anatomy around the implant is favourable), however, VISTA can be an appropriate approach for treating implant recessions, due to its: 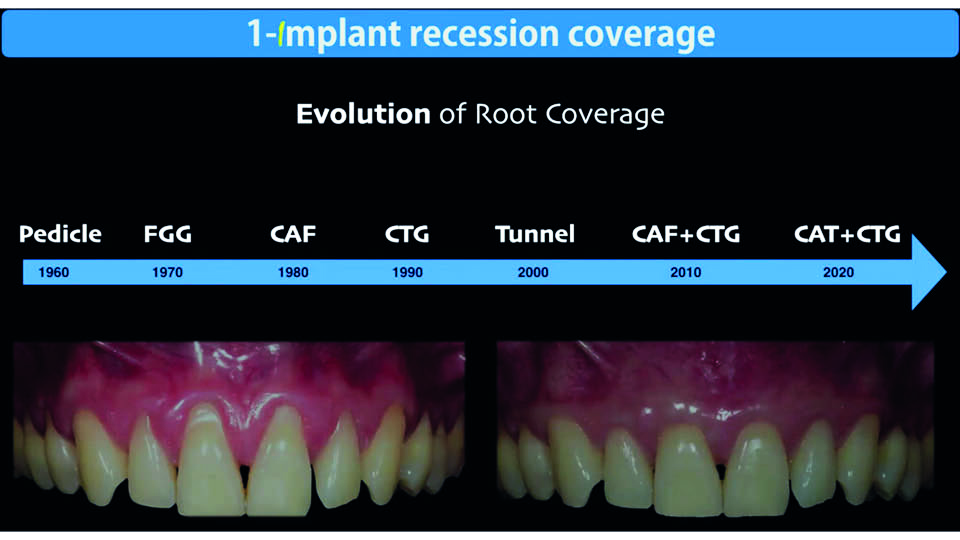 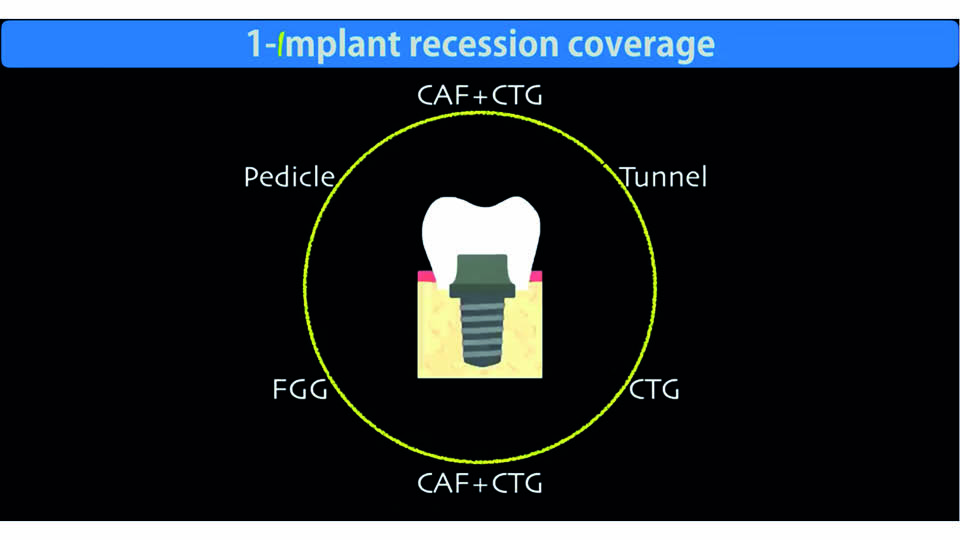 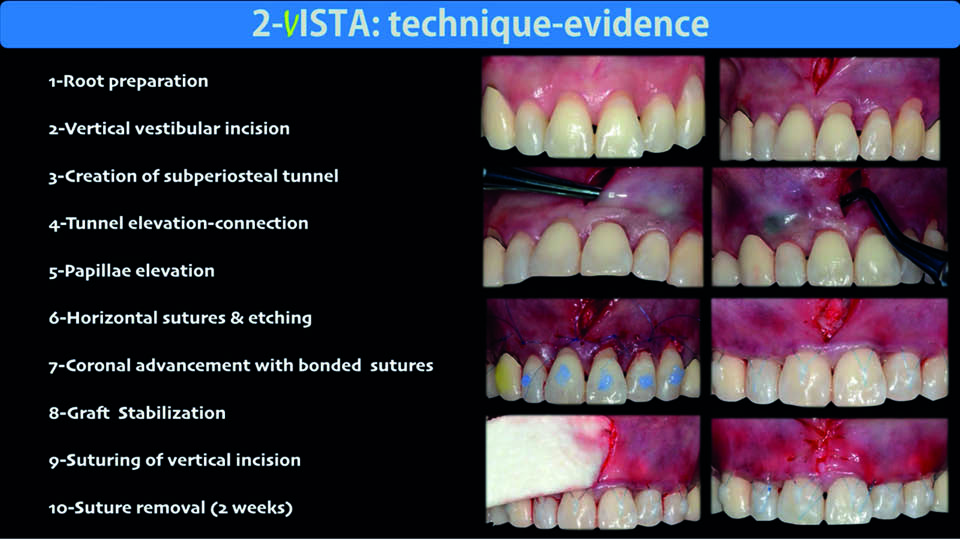