This session featured a novel format: two speakers presented different perspectives on the scope of digital workflows. Eric Van Dooren shared his clinical perspective, while the laboratory perspective was illustrated by Vincent Fehmer.

The opportunities arriving with digital workflows have undoubtedly changed implant dentistry. It helps simplify treatment procedures and makes them more predictable, reducing unnecessary risk and complexity. The digital environment allows clinicians and technicians to communicate with each other in a standardised way. Information can be gathered in three ways:

The speaker presented a case involving full oral rehabilitation, which was performed 20 years ago (fig 1­–2). The patient had undergone Lefort surgery and chin advancement. CBCT scans are now a prerequisite in the diagnostic stage, since 99% of cases should be performed in a guided approach.

When presenting the laboratory perspective, the speaker stressed how important it is to give the patient a chance to see a virtual visualisation of themselves and give feedback on it. The latest and most sophisticated 3D rendering procedures are still removed from the daily routine. However, using a smartphone it will soon be possible to scan the patient’s face. An ongoing algorithm[1] can stitch several images together images to create a dynamic 3D reconstruction with sufficient accuracy (Sailer et al., 2018). It is also possible to prepare a virtual mock-up using augmented reality[2] with a real-time visualiser (fig 3–4).

The aim of the different systems is to check several pre-treatment options which are then merged with the real movements of the patient. This can be done in a reliable and clinically acceptable way (Liu et al., 2019).

The application which the speaker currently uses is Smilecloud.[3] Different patient files can be dragged and dropped into the application, which means photorealistic representations of the smile can be designed and shared with the patient. It is also a collaborative platform: team members can connect around a clinical case to plan and progress the treatment.

There are several obstacles associated with conventional wax-ups. Shapes depend on the technician’s attitude and preferences, and there are always some differences in the forms which occur between one wax-up and another. Additionally, the mock-up has to be placed on top of the tissue and so therefore does not exactly represent the final position of the restoration. An accurate simulation with analogue mock-ups is hard to achieve when teeth should be shortened or the soft-tissues should be modified.

The use of digital tools can help overcome these problems. Smilecloud uses AI (artificial intelligence) algorithms to identify the most favourable tooth shape and position based on multiple parameters. The software can even mimic pre-planned soft tissue changes. The virtual wax-up corresponds to the real clinical scenario, as it is made by merging the new shapes into the existing dentition. The wax-up forms do not depend on a particular technician: they have infinite possibilities and do not differ along the entire treatment. Forms in the virtual reconstruction can be kept the same from beginning to end, ensuring predictability.

Returning to the case, the speaker showed the old crowns once they were removed, the cracked root of the left canine and the right lateral, which was too close to the canine. The left central incisor, in a more vestibular position, showed soft-tissue discoloration caused by a black root from reconstructive materials (Ioannidis et al., 2017).

The patient refused orthodontic treatment, and implant repositioning was planned for the three teeth. The first step involved soft-tissue surgery to improve the profile of the margin. Since the papillae were behind the line angle of the teeth, the bone volume allowed a flapless crown lengthening procedure to be performed. Next, a milled PMM provisional was made and placed. When the tissues matured, the provisional was scanned and merged to the Dicom files to design the surgical guide (fig 7–8).

According to the speaker, the literature on immediate loading is confusing (Weigl & Strangio 2016; Tonetti et al., 2017). The key to successis perhaps proper case selection. When placing implants in the aesthetic zone, the following surgical guidelines should be carefully observed:

Soft tissue support can be extracted virtually from Dicom files to get an exact copy of the root, to make individualised CAD-CAM healing abutments. Implants were placed in a fully guided workflow, since this approach has been reported to have the highest precision (Younes et al., 2018), and the provisional was placed.

In this case, it was possible to compare the healing of the individualised abutment (without gap) with the grafted-gap stock abutments, both of which used connective tissue (Rungcharassaeng et al., 2012), taken from the palate or from tuberosity (Tavelli et al., 2019) (fig 9–12).

After three months, the final prosthetic treatment was started by taking an impression. The speaker stated that he takes two impressions, analogue and digital.

Although there is a steep learning curve associated with single and short-span restorations, it is possible to go fully digital using a printed model. But there are still some concerns regarding the accuracy of this kind of model: namely, the finishing lines and contact points. To this end, a plaster model still seems to be required.

To reshape the soft tissue by digital means, the model was superimposed on the master model before extraction in order to copy the root forms exactly. Regarding the titanium bases, the speaker explained that they should be longer to achieve proper retention, have a 2mm (minimum) transition zone for the biological width and be yellow coloured (fig 13–14).

Bases become dark when sandblasted before cementation; discoloration is a real issue (Ioannidis et al., 2017). Different cements have been evaluated to assess their colour outcomes. ‘Multilink HO 0’[4] appeared to have the most favourable masking ability. In general, the opaquer the shade, the better it will mask the grey colour of the titanium-base abutments.

On the other hand, the conventional layering technique for applying ceramics inevitably leads to air inclusion and, in the long term, to chipping. This issue has been overcome by CAD-CAM fabrication.

Zirconia implant abutments fixed on titanium bases have been assessed in terms of biomechanics. A recent laboratory study evaluated their fracture strength on narrow-diameter implants and concluded that the results reported with two-piece internal zirconia abutments were similar to those obtained with one-piece titanium abutments (Sailer et al., 2018).

Another recent study compared three different monolithic reconstruction materials: lithium disilicate, Enamic[5] and Zirconia. These were bonded to a zirconia abutment and then to a Tibase. Bending movements ranged from 350 to 400Ncm, which are all perfectly within clinical guidelines (Pitta et al., 2019).

There is a trend for eliminating one interface and switching to one-piece only assembly between abutments and crowns. It is thought to be easier and cheaper: the hybrid abutment-crown is only cemented to the Tibase. An ongoing study is comparing the three materials monolithic reconstruction in this particular assembly after a thermocycling period equivalent to 5 years of ageing. The only material which has showed 100% survival is lithium disilicate on titanium abutments. The other materials showed fractures or debonding to varying extent. These results highlight the harmful effect artificial ageing has on mechanical stability and retention of cemented interfaces. The importance of following good cementing protocols should therefore be emphasised for long-term stability.

The same study was repeated with surface treatment as the variable. The best results were reported with the 50-μ Al2O3 sandblasted surfaces.

Another ongoing study has tried to evaluate three different cement systems by means of a pull-off test for the crowns cemented on the three monolithic materials. Beforehand, the tested materials were subjected to the same thermocycling. RelyX Ultimate was found to offer the best results with zirconia and PICN; Panavia could also be recommended for PICN, and Multilink Hybrid Abut gave the best results for lithium disilicate.

A careful bonding protocol (according to V. Clavijo) was followed to place the final restorations on monolithic lithium disilicate. The speaker stressed the fact that it is necessary to thoroughly clean the abutments before placing them (the speaker recommended L. Canullo’s protocol). The evolution of the soft tissue margins and emergence profiles were illustrated in figures 15–16. The final pre- and post-operative images can be compared in figures 17–18. 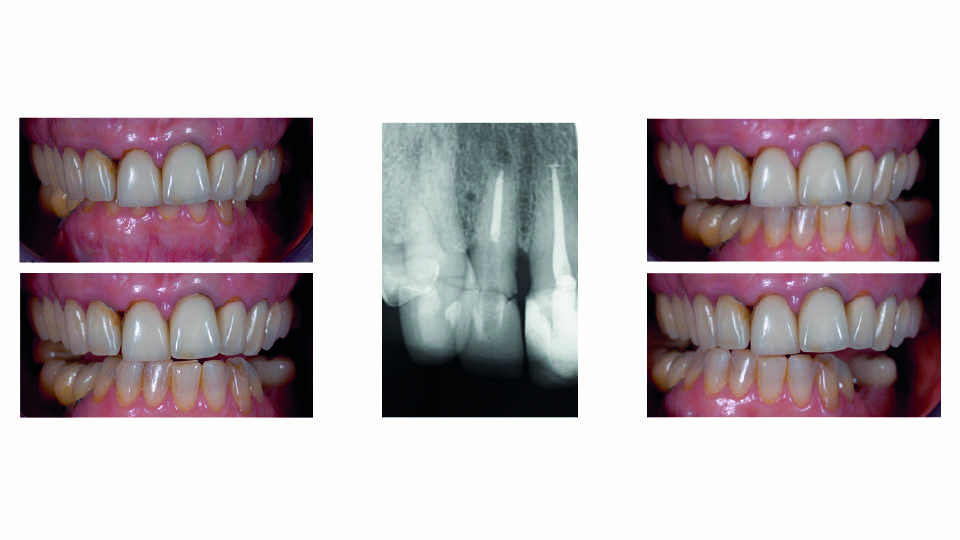 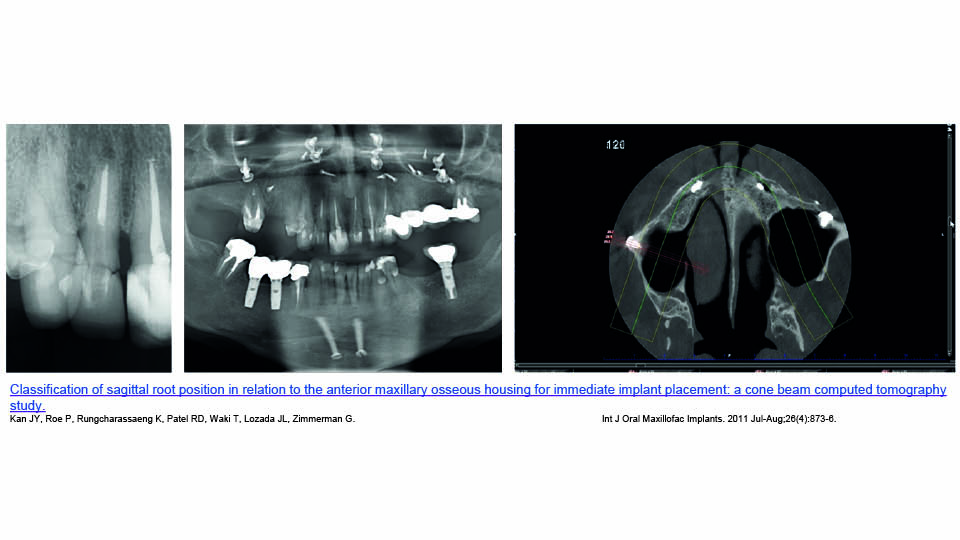 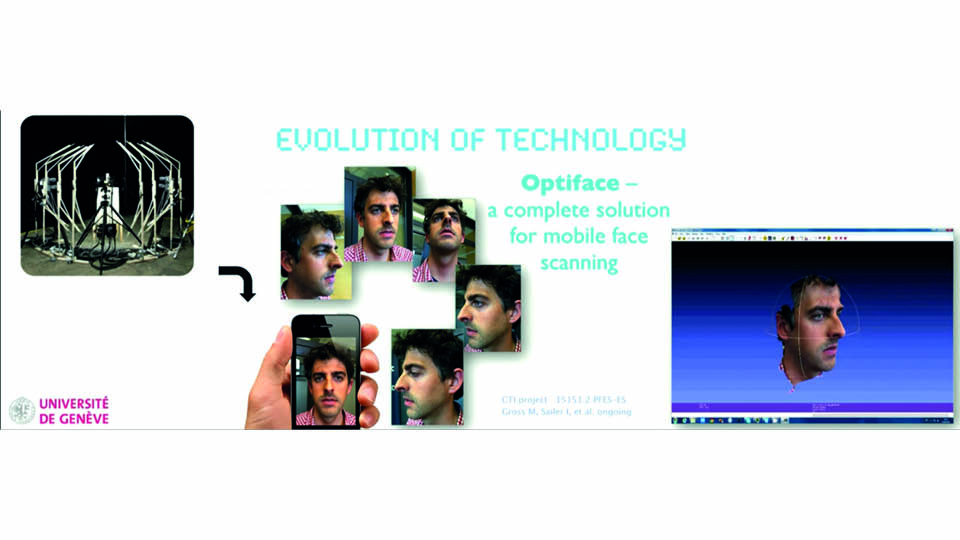 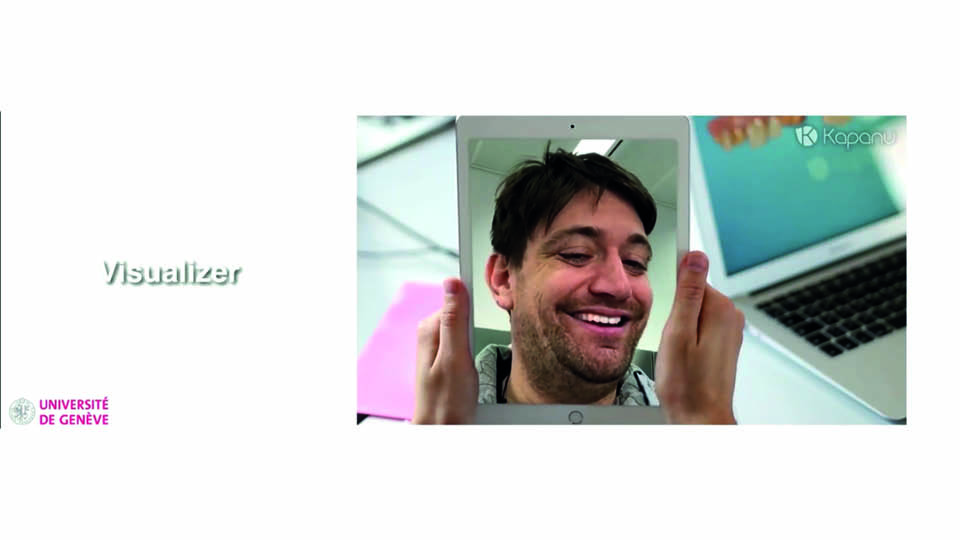 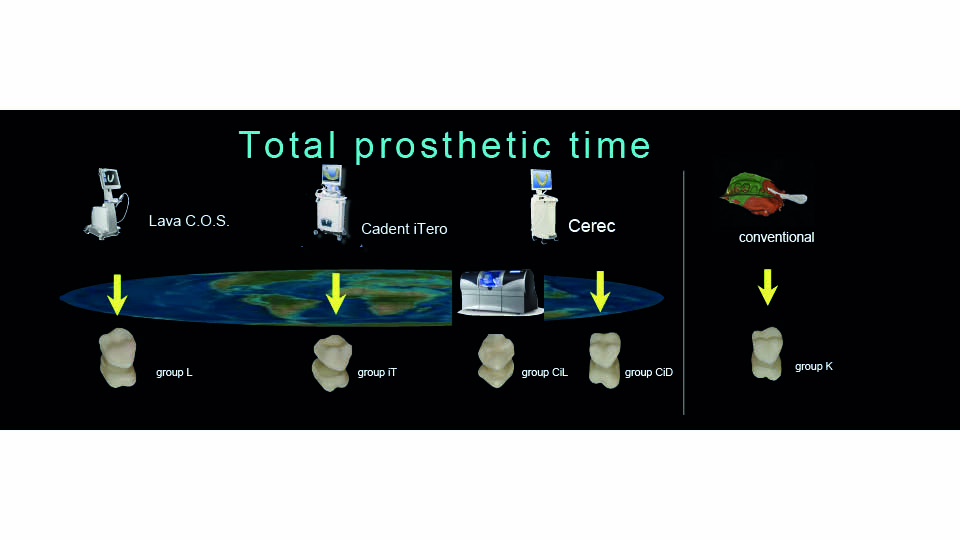 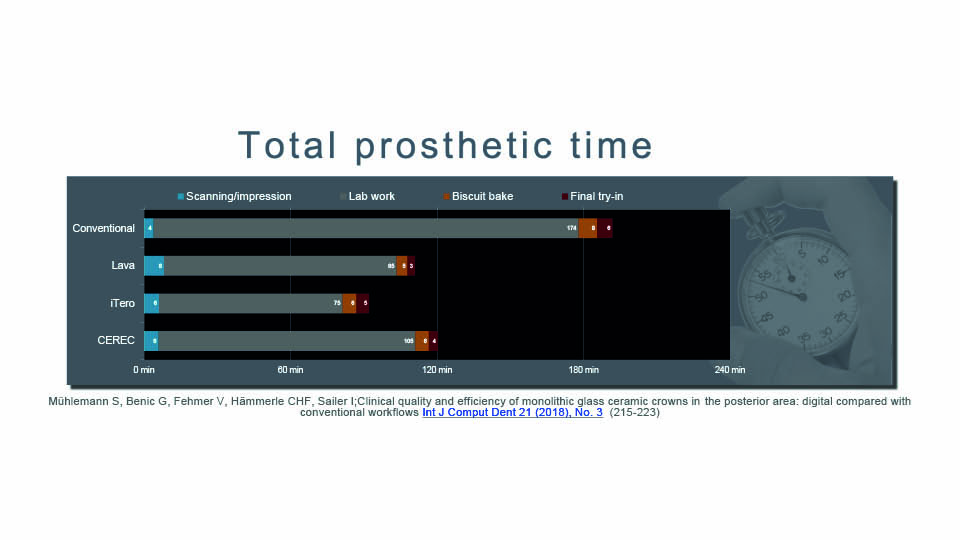 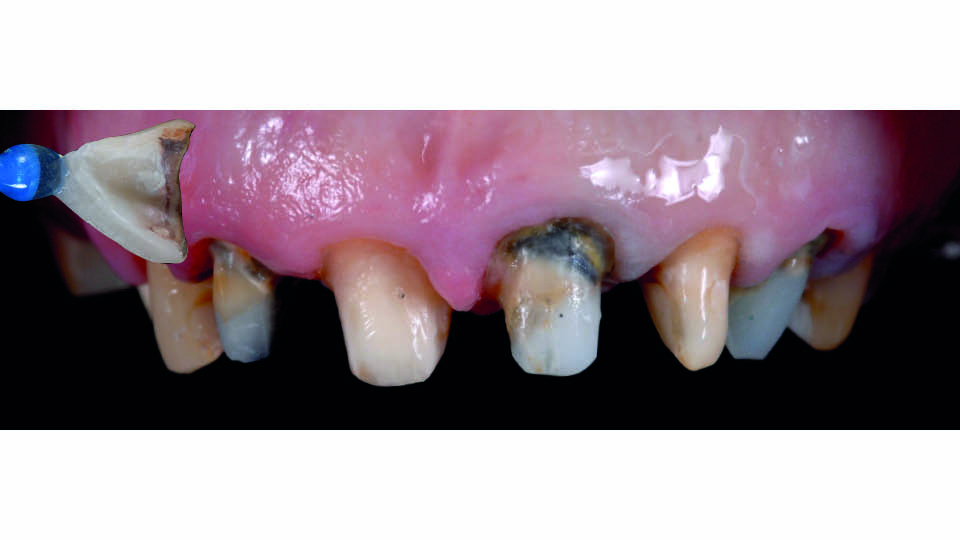 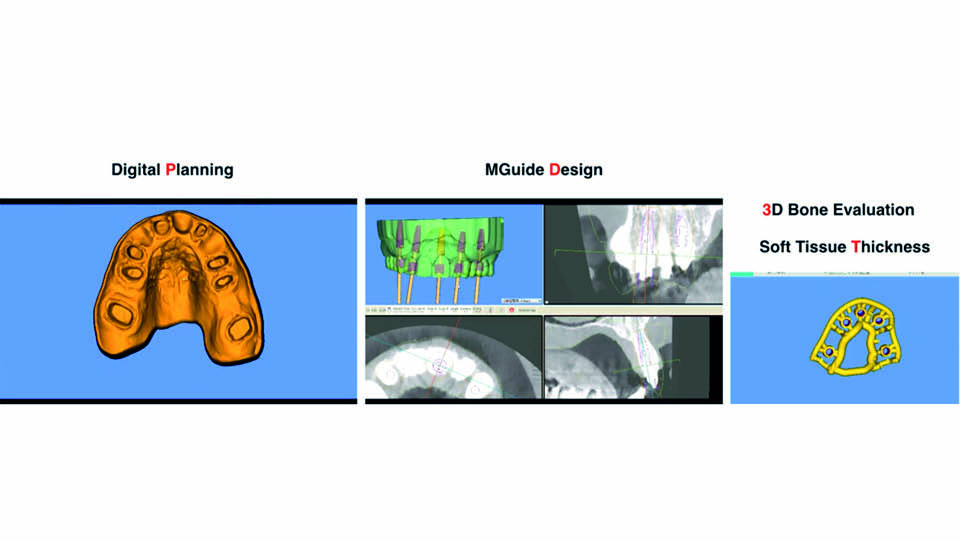 Fig 8: Design of the surgical guide 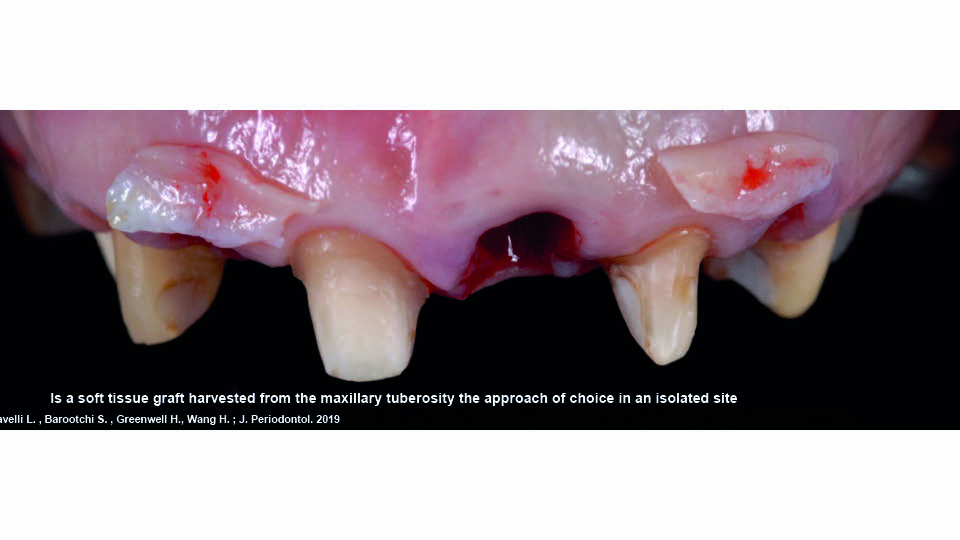 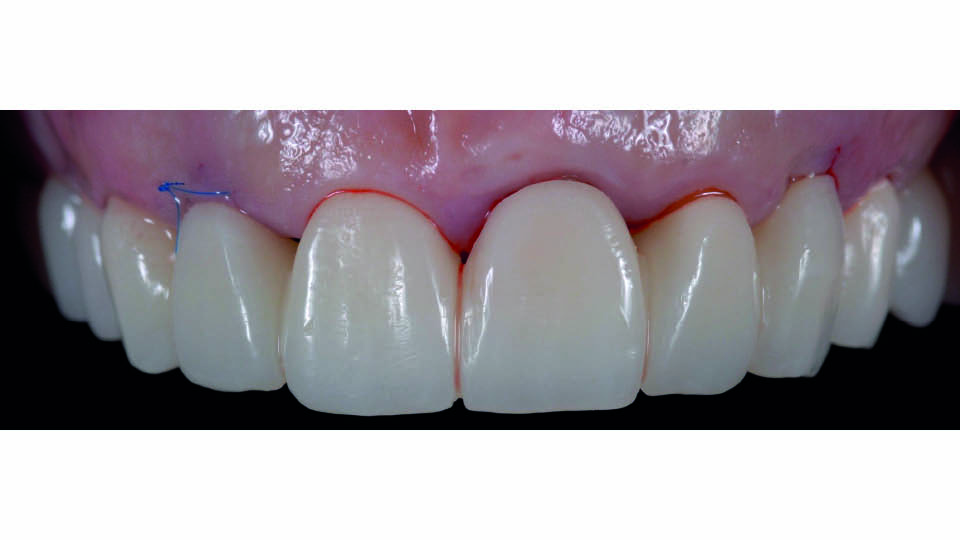 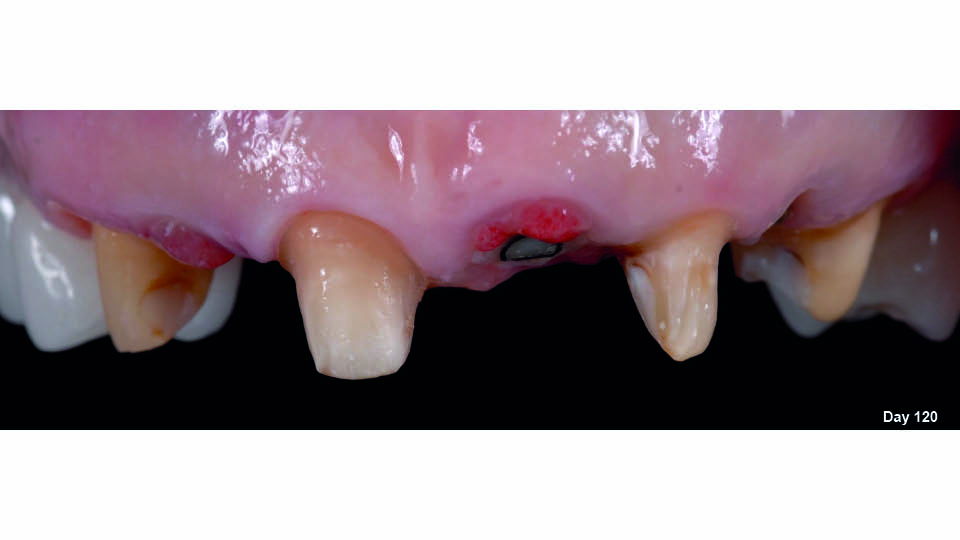 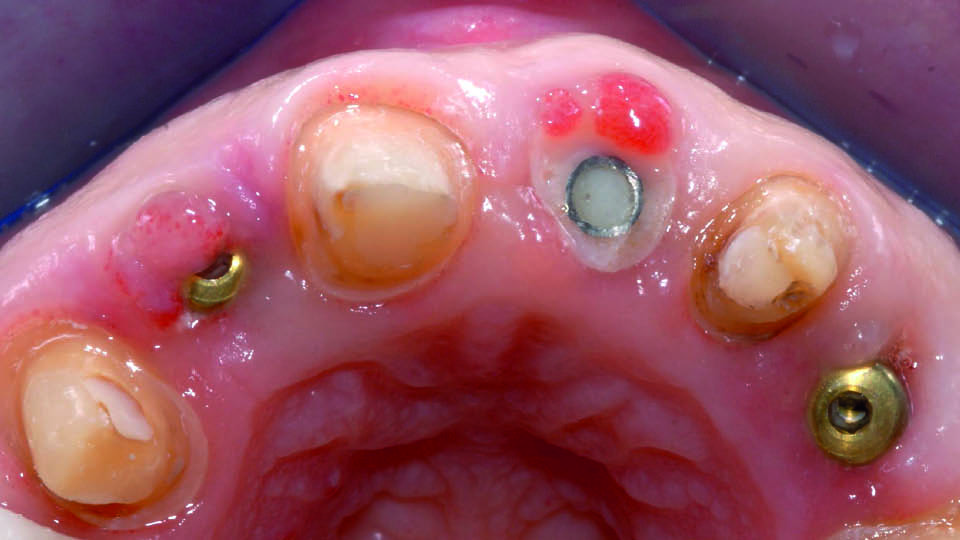 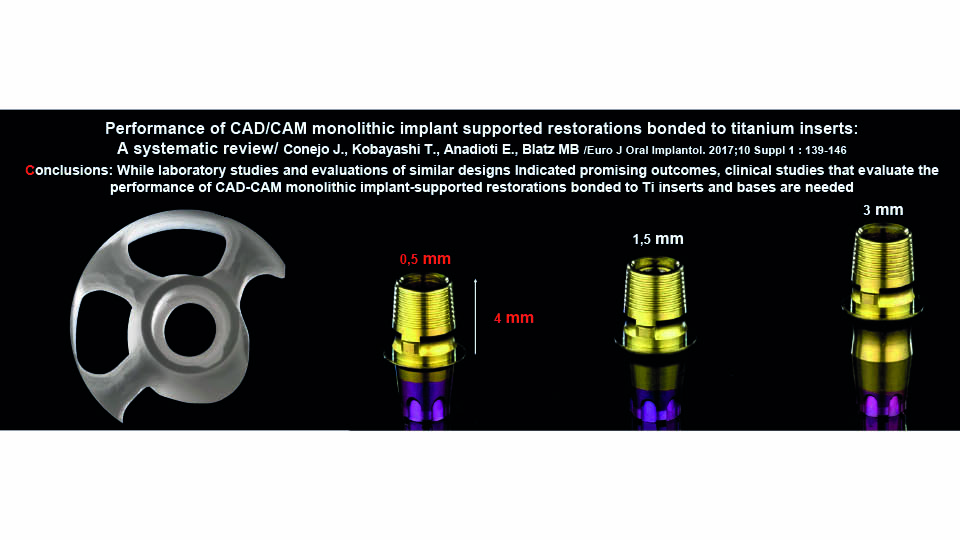 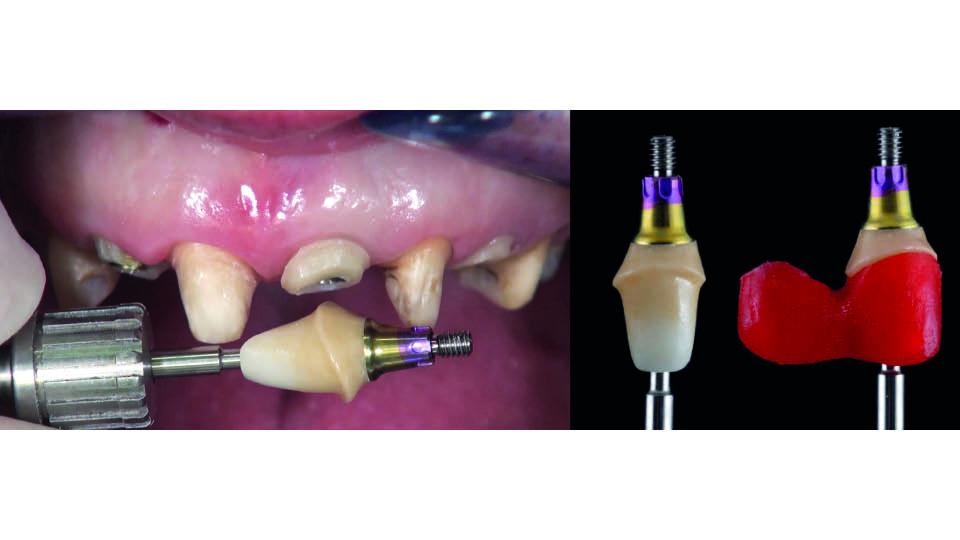 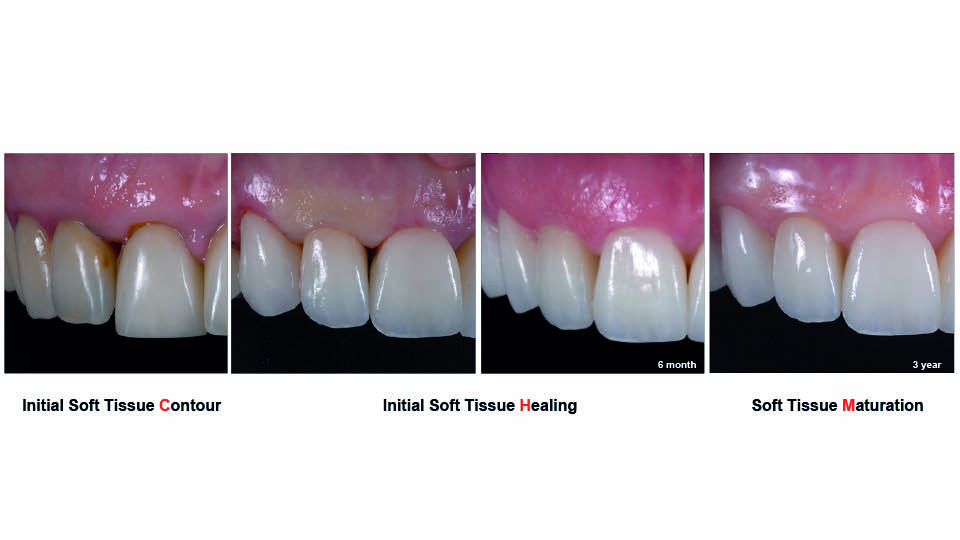 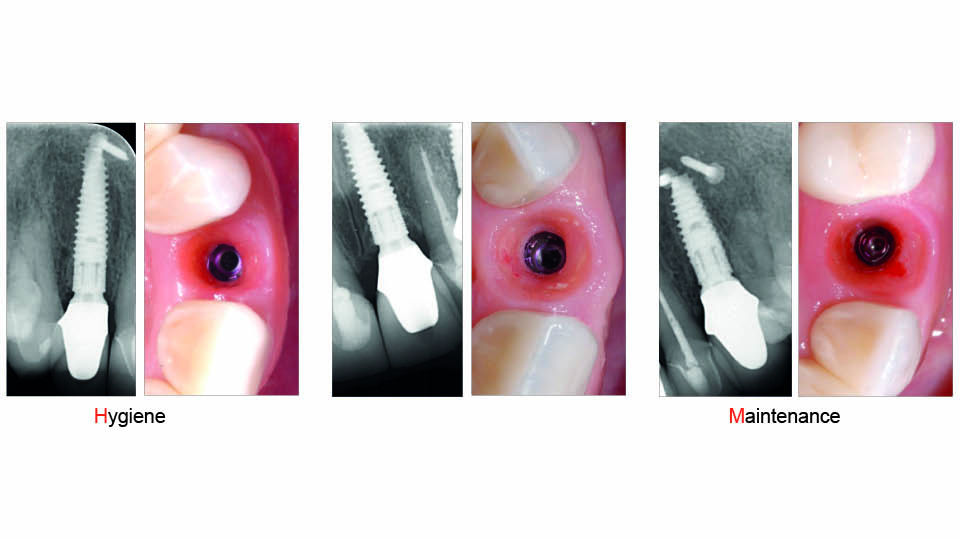 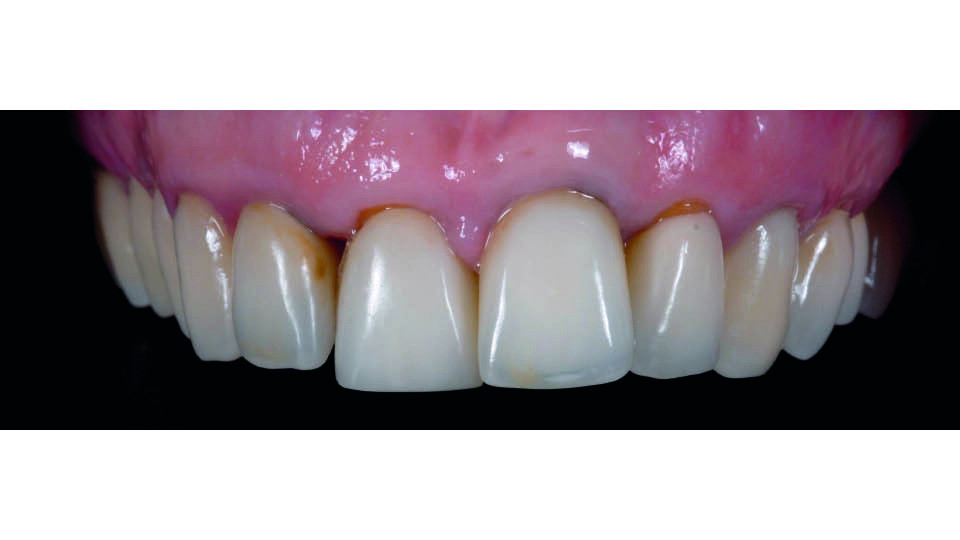 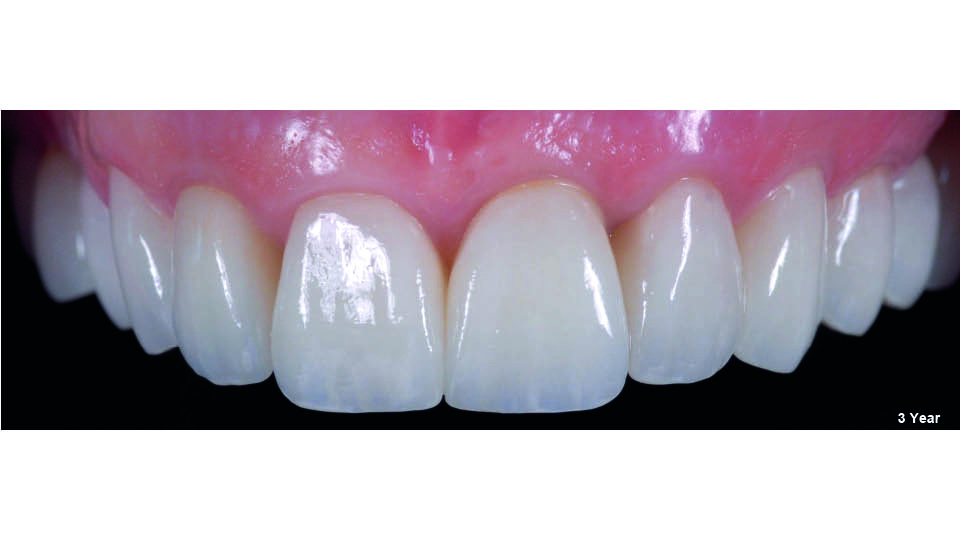